How can we tell the dancer from the dance?
-- William Butler Yeats 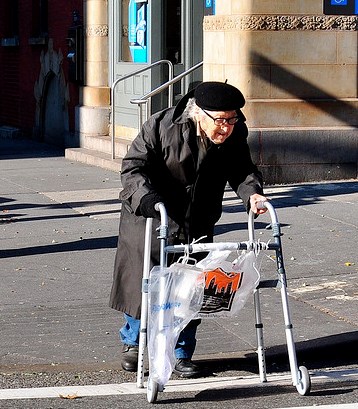 Not just bodies honed swans long accustomed to flight,
limbs agile as big bluestem in the breeze, but instead
dance lucid as light that permeates every pore of everything:
the 82-year-old woman, hands on walker, who glides,
pauses, receives the fresh air, the black birds pouring diagonally
across the street while she readies herself. Not just the black birds,
but the street itself grinding its fresh asphalt against weather
and time. Not just what seems inanimate but the air itself:
compression of moisture and speed, the physics of acorn fall,
the quirk of the cork fastening leaf edge to branch,
the call of train whistle threaded through wind.

Don't think it's only about thought executed through limbs,
or core strength making possible the explosion of agility.
Your thoughts are simply little snaps of the fingers, small ebbs
of old jokes from ancestors who danced in ways you can't imagine
when no one but the goat was watching. The dance always was
and is language: the break speed of the crow's wing, the dizzy
of a cold front powering through whatever was for a moment
the safe and the known, the ecstasy of the universe
of water, and how one duck lands on one pond in the dark.

There's the lonely man at the end of his life, waltzing
a broom at the train station. There's the young woman in the
parking lot who suddenly puts her cell phone away and skips.
There are new lovers and old ones, tilted broken ones and just
forgiven-all-over-again ones, making new shapes in the blankets
from their grief and yearning. There is the clump of dirt falling
from the shovel one woman holds, her sun glasses dancing
with the moving windows of grief across this moment,
as she waits to hear it all hit the coffin of her beloved.
There is the rush of whatever you think you are doing,
so fast that you lose your balance and rise in rhythm
with “Hey Jude” blasting from the apartment above.

Dance takes you up in its tired arms, aging legs, old muscles
and daring lungs so that you can angle life from breath from time.
Who dances? asks memory and joy. You do.

Poet's Notes: I wrote this poem as part of a performance of the same title at the Lawrence Arts Center in Lawrence, Kansas where I live. I was invited by choreographer Susan Rieger to write something on who gets to dance, who we want to watch publicly or not, and what that can mean. It was a very brave event because it also featured a famous choreographer who worked mostly with those we would expect to be the dancers: people with bodies young, long, slim and agile. As I read this poem at the event, I asked a friend of mine, dancer Laura Ramberg, an amazing dancer but far older than those we normally watch on stages, climb out of her chair in the audience and dance. Laura did, and it was one of the most meaningful collaborations I've been involved in as people listened to my words while watching a middle-aged woman dance her own stories and gestures.

Editor’s Note:  “Who Dances?” was previously published in The Midwest Review.
Posted by Steven Wittenberg Gordon, MD at 7:50 PM