The king badly injured,
the captain dead,
a two-mile hike
at night
in a snowy forest
that none of the king's guards knew,
the guards startled to false alert
by every falling clump of snow,
carrying King Xau on an improvised litter.
The captain's body tied to a packhorse.

Back at camp,
Li helped Shuen unload Captain Tsung's body,
set it on the snow,
laid the captain's sword atop him,
positioned the captain's hands on the hilt.
Told Shuen to tend to the horses.
Gan and Dao already on sentry duty.

Li went in the tent.
Various ointments spread out,
King Xau flat on his back,
alert but very pale,
Leong stitching his shoulder.

"Leong, do you need any help?"

(The larger question,
the question in Li's heart,
he left unasked this time.
Either the king would live.
Or he would not.)

Li unrolled the map,
angled it toward the lantern.
The nearest fort a full day's ride away,
no closer than their original destination.

"Li. When you have a moment."
King Xau's voice uneven.

Li went to him at once.

Darkness then in the king's eyes.
"Li, if you are willing,
we would appoint you
captain of our guards."

"Be certain. It is--"
Xau paused, pressed his lips together 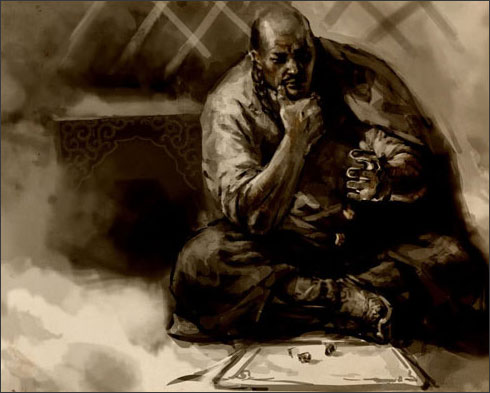 while Leong finished up.
"--it is hard enough to be our guard.
Harder to be the captain."

The king's voice trailed off. He lay still.

Li looked sharply at Leong,
who made the hand signal for asleep,
started clearing away his ointments.

Li stood a minute, watching the king,
before he went back to the map.

Poet's Notes: This is part of The Sign of the Dragon, my epic fantasy in verse. It takes place seven years into the story, just after the captain of King Xau's guards has died. Li, the focus of this poem, ends up becoming one of the most important characters in the tale as a whole. More poems from The Sign of the Dragon may be read at www.thesignofthedragon.com
Posted by Steven Wittenberg Gordon, MD at 4:39 PM