Special Feature: "My Changeling" by the Editor 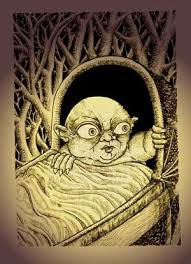 It is well known in county Fermanagh
that mostly unseen the faerie folk roam,
and that the wombs of the daughters of Mab
are cursed to yield the foulest of children:
evil, sharp-toothed, clawed, simian creatures
with wizened faces and chicken bone legs.
On still moonless nights the fae mothers will
steal away healthy human babes and leave
their own deformed offspring in place of them.
Added to their physical ugliness
these changelings have most foul dispositions,
howling incessantly.  Naught placates them
except it be family misfortune,
and then they are known to laugh wickedly.
They have also been known to devourer
all the food in the larders of their homes
in a single day and still cry for more,
forever remaining unsatisfied.
I was certain my newborn had been switched,
for it was unlike my other children
who were all fair of face and angelic.
I forced a tea made from foxglove flowers
down its throat then placed it in a basket
and brought it to the woods and left it there.
Legend has it that doing this forces
the faerie folk to take back what is theirs
and to give back the babe they have stolen,
and so I prayed that the faeries would bring
my own sweet child back to me--my real child.
That night there was a knock at the front door.
There stood the Queen of the Faeries herself.
She held the changeling screaming in her arms.
“Thank you, dear, for this offering,” she said,
“but this baby is not of faerie-kind.
‘Tis of your womb.  We return it to you.”

Poet's Notes:  Some children are born sociopaths, and there is little that can be done about it.  This has been true since Eve gave birth to Cain.