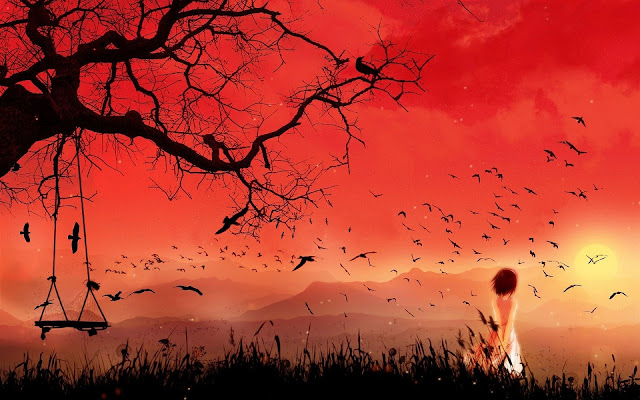 The sun sounds one last night in its rusting voice,
then leans to the west, sweetening its tune
by forgetting the melody. The taste of light lingers
in the sudden cooling of breath, the slim branch
of a twisted tree over the horizon
where one crow waits for the shadows
the moon will throw over the brome field
two turns of the wheel forward in time.

The stand of cedars wakes with a start.
The dry ground loosens its new cracks
and tilts rocks for the snakes to emerge.
The wind moves on, nothing to see here,
while the dark of the dark quiets its old hands.

What's gone seems like it's gone for good
no matter how often the song returns,
broken light reddening the opposite horizon
like a heartbreak, the song of the bloodstream,
the journey of stone through ocean to prairie,
every flicker of sound and motion always turning
into something, almost gone, almost here.

Poet's Notes: I'm drawn to the cusp, the edge between one thing and another, one time and the next, one emotion and what will replace it, all perhaps because I struggle (like most humans) with grappling with time. Having lost some loved ones in recent years, I write at times to find some reckoning with how a person can be so present, then so absent, yet still not always really and completely gone. Theodore Roethke said it best in his poem “The Waking”: “What falls aways is always. And is near.” This poem leans into that cusp of so much almost here and almost not at once.