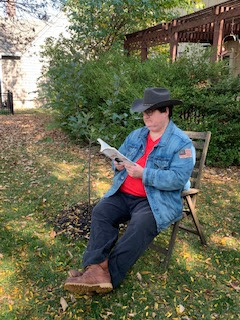 Steven Wittenberg Gordon, MD is the founder and Editor-in-Chief of Songs of Eretz Poetry Review.  He occasionally publishes under his Hebrew name, Shlomo ben Moshe HaLevi.

A decorated former United States Air Force flight surgeon, Dr. Gordon holds a BA from Amherst College and an MD from Albany Medical College.  Since first hitting the literary scene in 2012 and in addition to regular appearances in Songs of Eretz Poetry Review, Dr. Gordon has had dozens of poems and several short stories published in various mainstream and speculative venues.
Dr. Gordon is originally from upstate New York, but his heart belongs to Kansas where he raised his children, owns a home, and buried his dog.  He serves a diverse immigrant population in his private solo concierge medical practice.
Dr. Gordon is pictured here reading beside the grave of his beloved Airedale terrier and Songs of Eretz mascot, Lana the Poetry Dog, now Lana the Poetree.   Learn more about Dr. Gordon, his publication history, the books he reads, and his political opinions by exploring his personal blog, Steves of Grass  http://www.StevesofGrass.blogspot.com.

Jason Artemus Gordon, our first Art Editor, joined the editorial staff on March 2, 2018.  He holds a BFA in Fine Arts from the Columbus College of Art & Design.  His art may be found throughout our pages.  Like what you see?  His original artwork and prints thereof are available for purchase, beautifully framed and accompanied by the poems that inspired them if desired.  Query Editor@SongsOfEretz.com.