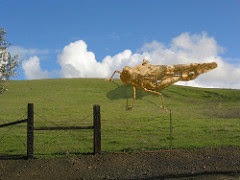 all shades of green from curled-up hairs of the fiddlehead
fern to the glassy-onyx sheen in eyes of pinewood dolls.

He must’ve been part Gryllidae, for when he readied
to color, he’d lift and rub his forearms together, slip off
his mottled shirt boasting clumps of sky and forest green,

then bite his lips, mix a little spittle with tobacco-green
paint, and set the olive tones by blending in the sour notes
with jealous tints of green that silked the edge of his palette.

And when he had the colors in every hue he wanted
that finally meant to be applied to canvas, Sir Hew
would noise about the palace, as if a metal toy, his voice,

clicking wildly for attention. He then wiggled his papery
butt unto the bar-green footstool, as if it were a wicket.
And he, perhaps a cricket, would hew a piece of rainbow

balanced on a blade of grass in the dew-mist sun, right there
upon the wall would paint the fields of England
with his magic and musical shades of greens (as well as
flitting butterflies) while waiting for the queen.

Poet’s Notes: I wrote this fanciful poem while thinking about crickets. Walt Disney’s Jiminy Cricket together with other creations, like Fantasia, launched me into a fantasy exercise. Not as clever and nonsensical as Dr. Seuss’ rhymes, “Sir Hew Paints Crickets” hopes to enchant with visuals and the sound of words.
Posted by Steven Wittenberg Gordon, MD at 3:24 PM