Poem of the Day: "I See, You Saw" by Sierra July

I See, You Saw
Sierra July 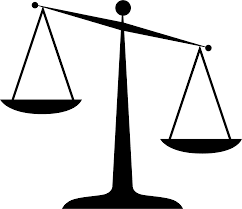 In park center sits a scale red & blue.
Some might assume that they were seeing
See-saw, lonely, devoid of purpose
As gaggles of giggling children pass

It lies, invisible to them ‘til
They age enough to see it, tipping
Under the weight of grown ambitions,
Against one another, deciding

Which way to tilt. Who should get success?
Who should fall on their rears, scrapped, bleeding?
On rare chance, when the wind billows just.
It balances and both parties win.

Poet’s Notes: This is an abstract piece playing with the image of the scale of justice. Watching a show with lawyers made me think of how evidence stacks for or against someone until the scale tips. I thought it’s similar to life itself and all of the small and large things, good and bad, that affect our lives.
Posted by Steven Wittenberg Gordon, MD at 4:56 PM