Start on the freeway, its asphalt black with promise,
the long stretches of refineries and factories,
the brown pockets of water where seabirds die slowly.
Necessary, your parents tell you before you arrive
at the next house made of new wood and fresh paint,
pale green siding that will never die, and a milk box
that doubles as a refrigerator in the blizzard of '68.
New trees park in front of each house, eager to reach 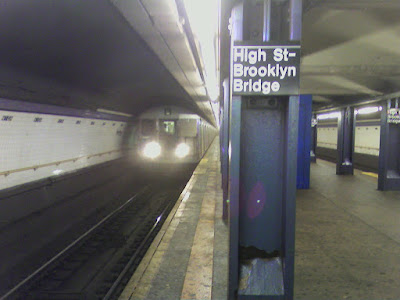 across the street in a canopy of reunion, years away.
You ride further: the brownstones hold onto each other
like complacent sisters. There’s yours: a sailboat
in the stained glass beside the front door. Your father
parks the Buick in the driveway so you and your brother
can take turns aiming the hoses toward the car again,
although you're more interested in soaking each other
even if it means getting spanked and sent inside,
worth it all to hold the power of rivers.
Now you ride along the elevated tracks into the squares
of sky between apartments that aren't yours until one is:
the brown brick overly textured by time and the stress
of lasting. Your mother, crying or just finished, looks at nothing
through the window. Something burns in the oven.
Your father is around the corner, playing poker, cheating
just a little. Part of how he earns a living, he'll say later,
which is earlier. Even more so: the peach-colored rose
spiraling from its curved petals against the chain-link fence.
You reach to put it in your mouth,  where words don't yet live.
It rains. A squirrel runs toward you. You don't know anything
but winter, the season of your birth, with its blue
glass, blue sky, blue rain until you're far enough back
that there is no ride, no you, no fleck of desperation
to begin, no speed or weight yet, just a freeway
of stars and darkness that holds more stars and darkness.

Poet's Notes: Somewhere I got the notion to write about childhood riding itself, and also writing itself backwards before I knew how to compose meaning in more conventional ways. Having grown up in Brooklyn and New Jersey, I spent a lot of time in cars and trains, and even more so, I felt enveloped by subways because my father's store, a little stamp shop, was in the subway arcade, so I grew up feeling trains above and below. This poem travels some of the lines from my early life, landing on images and sensations to get at something I don't know how to otherwise name about growing up.
Posted by Steven Wittenberg Gordon, MD at 5:16 PM