Special Feature: "Durian" by the Editor 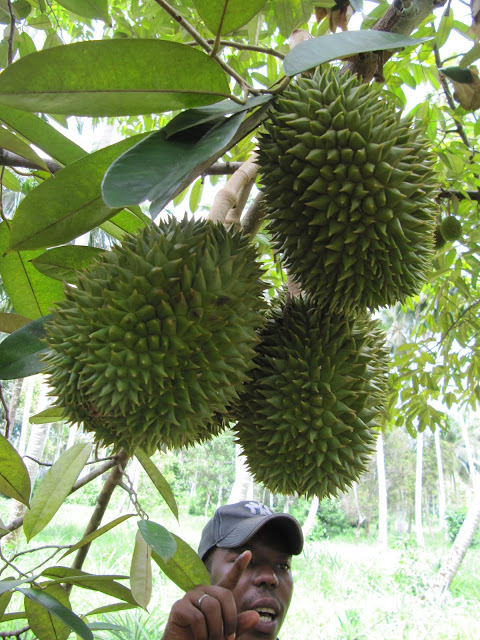 The fruit of the durian tree
is encased in a hard, leathery shell
covered all over with sharp spines.
Its appearance screams,
“Warning!  Do not eat me!”
Within the shell is a soft,
white pulp--the fruit.

The Indonesians love the stuff.
It is eaten raw and dried,
added to cooked dishes,
and even made into fried crisps
packaged and sold in a
similar manner to potato chips.

Our Indonesian counterparts
were quick to introduce
their hapless American guests
to the durian fruit,
encouraging us to eat it
and thereby prove our manliness.
If US airmen are anything at all,
we are certainly manly.
So, naturally, we all tried some.

When my turn came along,
I took a thimble-sized portion,
put it on my tongue,
moved it around my mouth a bit
(chewing was not necessary),
and swallowed.
The taste was simultaneously
bitter, sweet, and pungent--
like rotten cantaloupe
mixed with putrefied garlic.

It is, of course, impossible
to keep one’s face composed
upon giving the durian a go.
Accordingly, the Indonesians
had a good laugh at our expense.
Worst of all, the ghastly stuff
repeats on you.

Poet's Notes:  "Durian" is a poem from my unpublished collection A Wave of Poetry inspired by my small role in support of the international relief effort in the aftermath of the terrible tsunami that struck Indonesia and Thailand 26 December 2004.  A USAF flight surgeon at the time, I was one of a small contingent of USAF personnel deployed forward into Indonesia.  I was the only medical support attached to a small Tanker/Airlift Control Element (TALCE), which was responsible for maintaining an airfield in austere conditions for use in the collection and distribution of vital relief supplies for the Indonesians.

I kept a careful diary during my deployment in support of what came to be known as OPERATION UNIFIED ASSISTANCE and so, nearly a decade later, when I finally decided to write a memoir of those events, I was able to recount my experiences in some detail--and since I am a poet, I did so in poetry.  Unlike a standard prose memoir, I had hoped that my poetic one would not only document the events that occurred but would, in addition, evoke images and emotions in a way that only poetry is able to do.  Still in search of a publisher for the entire collection, I am pleased to share this part of it with the readers of Songs of Eretz.
Posted by Steven Wittenberg Gordon, MD at 5:06 PM