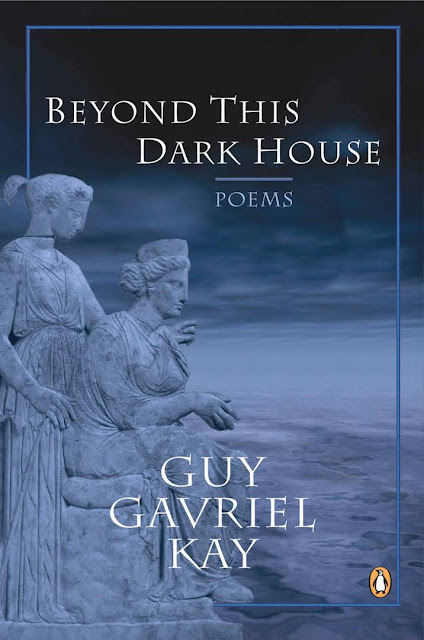 Guy Gavriel Kay is one of my favorite fantasy novelists. Now, having read this short book, but not yet having had time for it to sink in, he threatens to become one of my favorite poets. It is not that I liked every poem in Beyond This Dark House, but many of the poems were good, and several were outstanding.

In the opening poem, "Night Drive: Elegy," the narrator remembers his father. There are a multitude of poems written in memory of parents or friends, so that sometimes it seems that there is little room to add anything worthwhile to their collective weight. Kay has done so. For the most part, the poem is written plainly. The details are specific, their impact universal:

The drive back home,
just the two of us, end of a work day. He'd steer
with one hand at twelve o'clock and
an elbow out the open window. No one
ever born had hands I'd ever rather feel
enclosing mine. Then. Now. The day
the son we named for him was born.

The book includes quite a few poems about love that are seemingly autobiographical, of which I think my favorite is the closing poem, "Finding Day." There are also a number of assorted mainstream poems, one of which, "If I Should Fly Across The Sea Again," I loved.

And then, appropriately for a fantasy novelist, there are a number of fantastical poems. These range from variations on old myths to poems where the strangeness seemed to be the author's own invention. I particularly liked "Being Orpheus," "Medea," "Various Things," "At The Death of Pan," which has humor in it, "Hero," and "Shalott." But more than any of these, I loved "Guinevere at Almesbury," a masterful revisiting of the tales of Camelot:

There was no place to hide.
I was brought into another life
and began to live with grief,

for Arthur knew. He knew me as he knew
each single star that swung about like
pointers to his north.

I see them on a forest path,
riding together. Dappled, autumn
leaves, a slanting sun just risen.
Or in battle side by side
with bloodied swords,
in the hard north. Or talking
a winter night away beside a fire
in a kingdom that has not fallen.

A poem that is different from the opening poem, but both of them superb--poems to be treasured and to which to return.