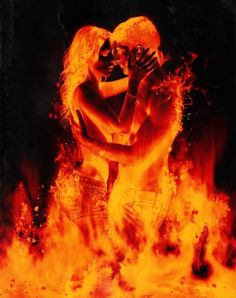 She was the dancing flame in the cave
Lost to the phrenzy of her inspiration
Eyes covered, robes clinging like flowing smoke
To the sinuous undulations
Of her dipping, twisting torso
The rhythmic flailing of her limbs
And when she pressed her lips to mine
I, too, was burnt

Poet’s Notes:  One morning, I had a "vision" of a priestess in a cave, lost to ecstatic dance, who scalded me with the kiss of her lips as I approached her. She is described as the dancing flame, and indeed I am not sure she is not simply the image of a gas-jet flame itself made flesh, or whether she is dancing before it as it emerges from the cave floor. Nevertheless, after this vision I wrote the poem immediately, with only slight alterations to the basic wording needed to reach its final form.

The title references the hypothesis that ethylene gas was the source of the Delphic Oracle's gifts of prophecy. Pythia was apparently intoxicated by fumes leaking from the cleft in the earth (where Apollo defeated Python), or so this idea goes. I hold no strong opinion to the merits of this view, but I liked referencing this idea, especially as I conceived the flame as gas-like in my mind.

Aesthetically, I wanted to use such wording as I thought conveyed the movements of the dance, and described the vision as I saw it. One other choice was the altered spelling of "phrenzy". I do not often use such heterodox spellings, but I preferred the "ph" to give it a Greek flavour, and which I can further justify from the Greek phrenitis which is the etymological root of the word.
Posted by Steven Wittenberg Gordon, MD at 3:47 PM