Special Feature: "The Grogoch" by the Editor 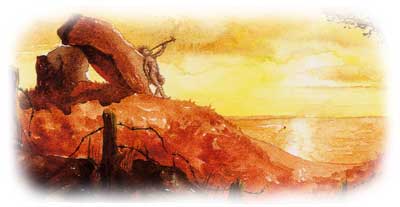 I came upon a grogoch one day a decade past
while hiking the Poison Glen in county Donegal.
I recognized it by its troll-like habitus and
the thick red hair covering its entire body.
It was lying by the lake emitting a soft moan.
I approached with caution and told it I meant no harm
and I would try my best to relieve its suffering.
It looked toward me with pleading eyes--eyes almost human.
The fur on its scalp was matted and clotted with blood.
I removed my tee shirt and soaked it in the water
and bathed and bandaged the poor creature as best I could.
I offered it a yogurt bar.  It gently took it,
sniffed it, then gobbled it up.  This seemed to revive it.
It stood, bowed, walked into the lake, and winked out of sight.
It is said that the grogoch have the ability
to resist great heat and cold, and also to become
invisible--a power it chose to exercise.

Last night I admit I had two whiskies too many
and must have fallen asleep as I sat in my chair
smoking my pipe and watching the stars through my window.
The next thing I realized the whole place was on fire.
I tried to escape but my intoxication was
profound.  I stumbled and fell to the floor in a daze.
Then I saw through the haze a pair of strong hairy arms
reaching toward me.  They grabbed me and dragged me to safety.
My eyes were watering from smoke and bleary from drink,
but I swear I saw a grogoch bow its head and smile.
I wanted to thank it but I blinked and it was gone.

Poet's Notes:  Being half Irish and related to a fae witch gives me reason enough to have a certain fascination for Irish folklore.  I was researching this topic and thereby discovered the myth of the grogoch.  The poem pretty much wrote itself--like magic!
Posted by Steven Wittenberg Gordon, MD at 5:25 PM