The Fourth Day of Christmoose by the Editor, Part 4 of 12

And so, Atay the jingling bells removed
And to the sleigh did make them fast attached.
When it was clear both boy and moose approved,
The ape upon his back the boy dispatched, 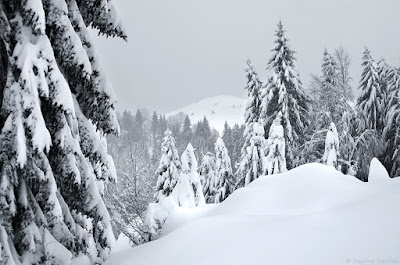 And bounded up the snowy mountain track
With Jason hanging on a-piggyback.

The moose, the while, so not to be outdone,
Did pull the sleigh upon the piled snows
And to the summit dashed at such a run
That beat he our gorilla by a nose.
Then ‘pon the sleigh our moose and ape did sit
With Jason in between them snuggly fit.

“Now let’s be off,” said Atay with a grunt.
“Yes!  Let’s!” cried Jason with excited voice.
“So hasty you’d not be were you in front,”
The moose intoned.  “Too late!  You have no choice!”
Exclaimed the ape.  Then with a mighty push
He heaved them off the summit with a whoosh.

“Whoa, whoa!” all three then shouted as they plunged,
“Look out!” they also yelled as down they flew,
As to the right and left our trio lunged
Avoiding trees, and rocks, and boulders too,
A snow bank of a sudden ‘fore them loomed.
The moose then closed his eyes and thought them doomed.

Editor's Note:  Are our heroes doomed?  Find out in tomorrow's edition of Songs of Eretz Poetry Review!
Posted by Steven Wittenberg Gordon, MD at 6:06 PM