I have heard it said 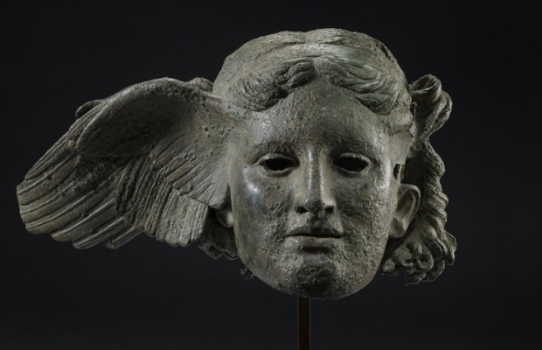 Even be the unity of narrative
Cannot discern the true trail
For they, too, follow a story
In dreams I often remember
Details of others long forgotten
To my waking self
Binding one to the next
As the days are likewise bound

Poet’s Notes:  This poem was written, though revised somewhat substantially, on the subway from a bit of inspiration I received previously at home. It takes as its theme a well-worn skepticism over the distinction between dreams and reality, lifted directly from Descartes, and which has been a feature of such philosophical musings since at least Chuang Tzu pondered dreams of butterflies.

Alongside, and buttressing, the central theme of dreaming, I employ throughout the poem references to paths and trails, culminating in the notion that these discussions form "the Cartesian circuits / of the Morphesque Labyrinth" (Morphesque being a neologism recalling Morpheus (pictured), God of Dreams, as 'morphic' implies 'form' instead of). Labyrinths, such as those found in the cathedral at Chartres, were to be walked to reach the center, not an exit, as an act of meditation and worship. The "exit-less" nature of the labyrinth is referenced in the concluding stanza, which shows a satisfaction with the lack of substantial difference between waking and reality. I am left only with the Cartesian deduction of the self for comfort, as implied in the last two verses, " Secure in the knowledge / That I alone am real". In other words, the meditations of the labyrinth have become the Meditations on First Philosophy.

Other references are made throughout the poem. I first heard the idea that you can distinguish a dream from waking by asking yourself how you arrived where you are by watching Inception. This theme returns in the second verse, where an oblique reference is made to Milton's Satan, who rebels against God as he cannot recall his own creation, and thus thinks he's a self-substantial entity "yet I do not remember being born / ... / my creation is obscure". The lack of being able to apply this method to our own lives solidifies the skepticism, and perhaps speaks to the centrality of the self in the Cartesian project, just as it did in a negative sense for Satan. I suppose Descartes wrestled with the demon as an adversary, saving him from "falling from grace" by making us his victim.

Lastly the "unity of narrative" notion was partially inspired by Alisdair MacIntyre's After Virtue, which defended a view of life as following a narrative structure as part of his curious attempt to give a modern treatment of virtue theory. I used this idea as I have come to realize that my dreams share the same sort of constancy as my waking life, as I have discovered a substantial coherence of my dreaming world, up to and including a unity of experience that involves remembering dreams I have long ago forgotten otherwise. In a sense, I feel like I often inhabit a parallel existence in my dreaming, so much so that I have thought to map the bizarrely consistent world in which I regularly find myself. I can't speak to the ontological status of this other world, and would not be silly enough to suggest it is truly real, but it's fun to pretend it is.

I did do some reworking up to the moment I submitted this for publication. Previous versions had notable alterations, and I wanted to underscore some of the main points that I made. Still, it was not a difficult poem to write, and indeed bears striking resemblances to the original form, such that I think of this only as an improvement rather than a full rewrite over what I originally wrote in my notebook on the subway.

Editor’s Note:  I thought of this http://www.jango.com/music/Roy+Orbison as I read this poem, absurdly enough.  What a fascinating treatment of the subject we have here!  Rowe could have written a compelling essay, but in the form of poetry he expresses so much more.  Merrily, merrily, merrily, merrily...
Posted by Steven Wittenberg Gordon, MD at 9:56 AM