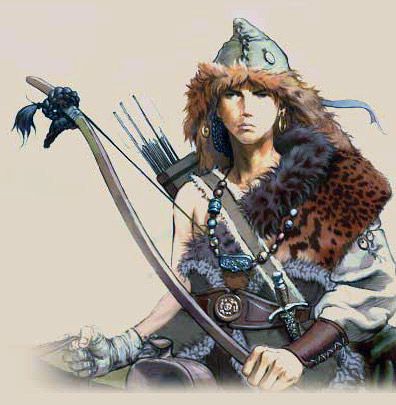 wounded, worn out, harrowed,
from war toward peace negotiations,
rode with his ally King Memnor,
likewise wounded, weary,
the two kings managing
thirty or forty miles
before their surgeons ordered
a halt for the day.

Swifter by far,
riding to intercept Xau,
rode Hana, his queen.
Rode from dawn to dusk,
a hundred and ten miles a day,
changing mounts at every way station,
her guards struggling
to match her endurance.
Rode armed with bow and knife
and the knowledge
that Xau would prize
each hour she gained with him.

Xau,
seeing the riders' rapid approach,
not allowing himself
to believe Hana had come
until he could make out her features--
his heart speeding
as he sped his horse toward her--
dismounting awkwardly,
leg stabbing with pain, unsteady,
holding onto his horse one-handed,
reaching for her with the other--
judged differently.

Poet's Notes: This is part of The Sign of the Dragon, my epic fantasy in verse. The hero, King Xau, confronts many trials: wars, assassination attempts, natural disasters, a demon, and a monster. Widowed when he is still young, Xau falls in love with Hana and pursues her ... which leads in turn to further trials and tribulations, but also, as in this poem, to joy.

An earlier poem about Hana, "The Ride," is included on the webpage for The Sign of the Dragon at www.thesignofthedragon.com.
Posted by Steven Wittenberg Gordon, MD at 5:10 PM