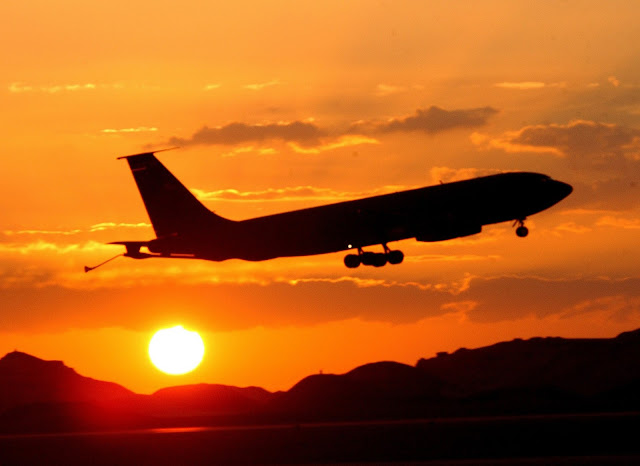 Yellow and red in the spectrum,
the backdrop is ablaze;
and only art lovers
are alerted to this crisis
of inspirations blasted and dimmed!
With others huddling, amid
beautiful curves and rigidity
and multiple needs,
Their sleeping minds
protected by curtain walls
and in-fills
and the relentless
grandeur of glass.

Above them, the transparent maps
and courses of commerce
redirect one
Goddaughter of the sky,
with elegant wings, shapes stolen
from unwieldy, earth-bound geometry,
and taken up
from mines, from caves of treasure,
and moved to hangars
with fans, shiny floors, wingspans, and boys
piloted and helmeted
to act out daydreams
lapsing into normalcy.
With coolness and clouds, boxed
into bordered windows, and blurs
of orange, trailing.

At the edge of this city,
Black crows sit on a wire,
staring into sunset
and of course they say nothing
and they are not threatened
by others dreaming of what is to them
the dullness of each day, this ability
to move on air.
A girl looks up, her skin is soft,
Her eyes are soft,
Her eyes are blue, her skin is white,
Her soul as playful and as quick
as those highly drifting
impulses of particles.

Poet's Notes:  Broken down into its visual parts, the poem "Goddaughter" depicts a jet plane flying over a modern city, with evening light as the backdrop. And somewhere along the urban edge, crows are perched on a wire while a little girl observes the plane admiringly. This scene is all a conjuring of my imagination, but I wanted to connect these subjects visually and somewhat tenuously, and with a mindfulness of the materials involved. In my recent poetic work, I have been particularly conscious of the materials out of which things get made. Whether this heightened awareness is indicated subtly or directly within my actual verse, I believe that this tactic improves the quality of the poem as a whole, by anchoring it with physicality and intention.

I came up with this poetic challenge for myself after visiting Tate Modern in London and noticing all of the object labels that explicitly describe the materials with which abstract sculptures were crafted. There are wonderful words for some of these materials, and the words have creative and technical undertones. My mind buzzed as I read words such as: acrylic, papier-mâché, polymer, scrap metal, foamcore, fiberglass, and polychromed bronze. This gave me a newfound appreciation for building materials and components. I wanted to see what would happen if I brought that builder's mentality over to poetry. To this end, the buildings featured in my poem are not merely "structures" or "towers," but rather they are things with "curtain walls" and "relentless glass." The jet plane soars through the sky and inspires the girl below, but even that spectacular sight is reduced to "highly drifting impulses of particles." And the second stanza is largely a meditation upon the process by which the jet plane was engineered, with "shapes stolen" from mines. All of the descriptions are breathless, deliberately. I wanted the language to be lively, even if it means the images do not fully register.

The title "goddaughter" came about in a different way. It refers to the notion that the sky sponsors the baptism of the pilot and in a way adopts the pilot and the aircraft as its own child, and under this logic the black crows would be the sky's more natural progeny. Throughout the poem, the sky plays a watchful and maternal role, and with its colors it attempts to inspire humans by contrasting their "rigidity" and "bordered windows."
Posted by Steven Wittenberg Gordon, MD at 9:49 AM