Review by Reinhart of Working with the Negatives by Steven Storrie 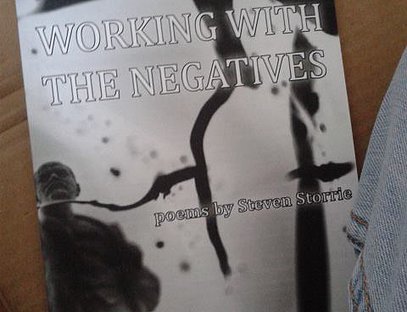 Steven Storrie's first collection of poetry, "Working with the Negatives" (Pski's Porch, 2016) is fifty-one pages of poetry that kept me flapping the pages. It was coincidence that my receipt sat on "Bush Era Tattoos," but a fitting one. I am continually fascinated by reflections on 9/11, perhaps as the previous generation was by the Kennedy assassination.

I got these tattoos when
George W. Bush was President
When there was a war on something called
Terror
The Patriot Act, WMD’s and Guantanamo
And nobody knew
what the fuck was going on

This, following the previous Republican era when “E.T. told us what really happened/To Christ” and followed by “Watching the UCLA Women’s Gymnast Team” to “wonder just when it was/Everything/got quite/So fucked up.”

But it’s not existentialism and politics--just mostly. There’s working the garbage tour day in, day out--the invisible essential nobody. There are mill workers, firefighters, strippers, all gouging away as “the weeks pile up/like dead bodies/Blank faced and unaccounted for,” from the final poem that ends “What I wouldn’t give/Just once/To be/King.”

The title plays on developing photographic negatives and the working with the negative aspects society inevitably throws our direction. Storrie, whose bio says he has worked as a cable TV repairman, dishwasher, choreographer, ice cream vendor, and junkyard attendant, could easily have been one of my housemates. The hints at his fatherhood and marriage (“Advice for my Unborn Son” and “Last Exit to Nowhere” in particular) suggest the complexity of the politics and existentialism, or perhaps I am just reading my own fatherhood and marriage into the existentialism and politics that I want to read between Storrie’s lines.

Nevertheless, there are poetry collections I appreciate, and poetry collections to which I will return. I take only minor issue with Storrie’s general lack of punctuation. Most often the poems do not suffer from the sparse use of punctuation, but occasionally I found myself distracted by the lack of commas and periods (though all poems end with periods) and the inconsistent capitalization at the beginning of lines.

The book’s layout is clean and clear, and the cover is a striking combination of black and white (negatives) collaged, with only a view of a Vladimir Lenin statue clearly recognizable. This is a great collection to leave casually lying around the workplace.
Posted by Steven Wittenberg Gordon, MD at 2:26 PM