"Phantom of the Trains" by John C. Mannone, Frequent Contributor 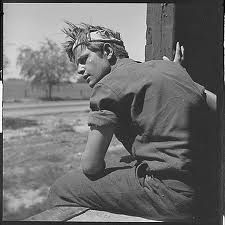 I see his apparition whoosh
through the rust on iron rails,

through vestiges in steel, fast
running into static thoughts, past

the Baltimore train yards full
of freight and foolish dares.

He climbed a coal car’s ladder,
stretched for balance, grabbed

the humming green wires. If only
I were there to stop him dead

electrocuted by short-circuits
in my memory. I was ten with

a best friend, and then alone,
tossing stones into the empty

railroad cars, hearing rattle
& clang as they tumbled down

the sloping walls. I am haunted
by the echoes of his ghost.

Poet’s Notes:  It is a sad thing. This poem is based on a true story that I don’t often want to remember. I didn’t have many friends while growing up, but Jay was one of them. He looked a little like Henry, the comic strip character, because his head was nearly bald. Jay was adventurous to the point of foolishness; he was a year or two older. I lived at 2513 (or was it 2315?) North Charles Street in Baltimore, MD. Pennsylvania Station was on the 1500-block (https://en.wikipedia.org/wiki/Pennsylvania_Station_(Baltimore)) We had explored the railroad yards, but I was afraid and cautioned Jay not to go any closer to the tracks than we had already ventured. The next day or two, he went there alone. My mother told me about Jay’s death. The poem suggests through the narrator, who is I, had gone back to those railroad yards; I only did that in my mind.

The poem is put down in approximately equal-length couplets to suggest railroad tracks. I use enjambment to finesse a cliché split between the 5th and 6th couplet.
Posted by Steven Wittenberg Gordon, MD at 2:54 PM