Poem of the Day: “Seasons in Steel” by Ross Balcom

Songs of Eretz Poetry Review is pleased to present “Seasons in Steel” by Ross Balcom.  Mr. Balcom is a counselor living in Anaheim, California. His poems have appeared in:  Beyond Centauri, inkscrawl, Scifaikuest, Star*Line, tinywords, and other publications.

Seasons in Steel
by A. Robot 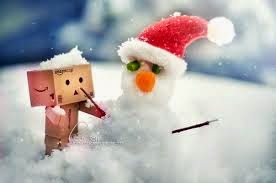 2.
summer vacation
vacation???
does not compute

Poet's Notes:  Haiku traditionally include seasonal references. This scifaiku sequence offers a robot's perspective on the changing seasons. As a lover of both haiku and robots, I enjoyed writing this poem.

Editor’s Note:  I enjoy the ironic humor, haiku-like form, and science fiction speculation here.  And I, too, am a lover of both haiku and robots.  “Seasons in Steel” first appeared in the August 2013 issue of Songs of Eretz Poetry E-zine.
Posted by Steven Wittenberg Gordon, MD at 7:28 PM