Poetry Review Special Feature: "The Dickinson Dialectic" by the Editor

Emily Dickinson’s choice not to choose a “final” version of some of her poems both empowered and disempowered her as poet when her works were brought to print.  This dialectic has become more apparent over time as more editions of her work and the manuscripts themselves have become available to readers.  The different versions of Dickinson’s poems disempower her as a poet when editors choose one version over another at the risk of choosing the “wrong” version.  However, the fact that a choice of versions must be contemplated by editors forces the editors, at least the conscientious ones, to examine Dickinson’s handwritten manuscripts carefully--the definition of empowerment as a poet. 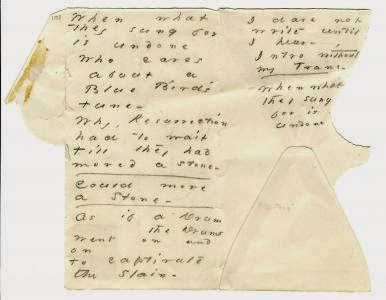