Poem of the Day: “Kitchen Carcharodon” by Robert Borski

Songs of Eretz Poetry Review is pleased to present “Kitchen Carcharodon” by Robert Borski.  Although he did not start writing poetry until he was well into his sixth decade, Robert Borski has published over 200 poems, a good portion of which have appeared in:  Asimov's, Dreams & Nightmares, The Magazine of Speculative Poetry, and Star*Line, as well as a collection from Dark Regions Press, Blood Wallah. He has been nominated for the Rhysling Award nine times and the Dwarf Stars Award thrice, and still lives in Stevens Point, Wisconsin, the town of his birth, where he works for the local university. 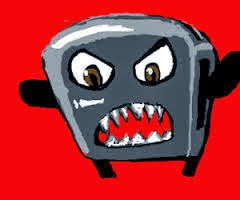 No primordial killing machine
designed
by nature could be this singularly

harmless looking, with neither fins
nor teeth,
its long black cord functioning not

appliance with its open gills of
chrome, spring
jaw, and burnt-crumb breath.

And yet despite these deficiencies,
it swims,
if statically, in a current strong

enough to carry away an Olympian,
its boxlike
form dictated by function, if not

the fetished mind of Martha Stewart.
Hidden in
plain sight, usually in the cove or bay

of a kitchen, it waits to strike down
the unwary,
the unsuspecting innocent

who, hungry for a pastry or bagel,
but distracted
by the menialness of the task,

does not notice the frayed cord,
blissfully placing
his hand too close to the open slits

or the shiny body of the appliance
itself,
anticipating the sweet butter-and-jam

taste in his mouth, the delicious chew
of crust,
completely oblivious as to what lays

in wait for him, deadlier than any
shark,
even if able to make perfect toast.

Poet’s Notes:  Every year, usually just before summer begins and real news is somewhat slow, the cable networks are wont to trot out one of their more staid fright stories--how a shark somewhere in the world has dared to take a bite out of some swimmer or surfer. Small matter that we are trespassing on their milieu or that sharks might confuse us for food. Nor will you ever hear a talking head tell you how relatively few people are killed by sharks annually or that you're much more likely to die from a bee sting, lightning, or trying to retrieve a stuck English Muffin from your toaster.

So to be fair to the shark--the networks' primordial killing machine inching ever closer to shore, hoping against hope for a taste of human sushi--I wrote "Kitchen Carcharodon." In terms of challenges, it also does what many of my poems attempt to do: compares and contrasts two disparate subjects, and then show how much alike they really are.  In addition, though not my first poem accepted--Marge Simon, then-editor of Star*Line, had previously accepted two--because Strange Horizons had a faster turnaround time, "Kitchen Carcharodon" was my first published poem and so retains a special place in my heart.  And just for the record, while I wouldn't think twice about stepping into the ocean, every time I make toast I do so with caution, trepidation, and maintaining some distance.

Editor’s Note:  The ironic humor here is, well, delicious.  “Kitchen Carcharodon” was first published in Strange Horizons, and was reprinted in the November 2013 issue of Songs of Eretz Poetry E-zine.
Posted by Steven Wittenberg Gordon, MD at 4:18 PM