Poem of the Day: “When Again I Feel My Hands” by Marge Simon

Songs of Eretz Poetry Review is pleased to present “When Again I Feel My Hands” by Marge Simon.  Ms. Simon's poetry, fiction, and illustrations have appeared in publications such as Strange Horizons, Niteblade, Daily Science Fiction Magazine, Pedestal, and Dreams & Nightmares. She is a former president of the Science Fiction Poetry Association (SFPA) and has served as editor of Star*Line, its journal. She won the Rhysling Award for Best Long Poem in 1995. She edits a column for the Horror Writers Association (HWA) Newsletter, "Blood & Spades: Poets of the Dark Side" and serves as Chair of the board of trustees.  She won the Strange Horizons Readers Choice Award in 2010 and the Dwarf Stars Award in 2012. In addition to her poetry, she has published two prose collections: Christina's World, Sam's Dot Publications (2008) and Like Birds in the Rain, Sam's Dot (2007). She was awarded the Bram Stoker for Best Poetry Collection twice (2007 & 2012). Both of her 2011 poetry collections, Unearthly Delights and The Mad Hattery were Stoker finalists. Elektrik Milk Bath Press published a collection with Sandy DeLuca, Dangerous Dreams, in 2013.
She is an active member in the HWA, Science Fiction & Fantasy Writers of America (SFWA), and SFPA.  Find out more about Ms. Simon at www.margesimon.com.

When Again I Feel My Hands
Marge Simon 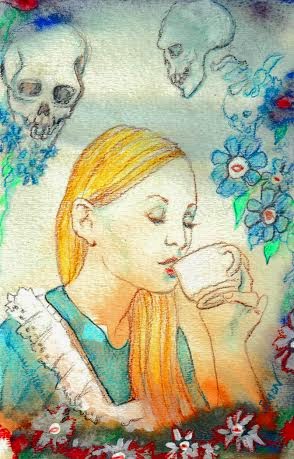 My wooden hands
hang idle on the strings.
Master’s drunk on Holland gin
& sleeps beside the wench
who takes my place.

Half human, half wood,
in a world deprived of joy,
I am the fool’s scepter,
a reprieve from tedium,
my simple plays enhanced
by classical compositions.
You cannot know how dear
the price of mirth.

With his dark eyes, he wooed me
& with his magic, he prevailed.
Father swore, mother wept
as he swept me in his arms
& then away to foreign lands.

Soon he’ll tire of her,
& cast a spell to change her form
as did he mine, to suit his needs.
She’ll bob & bow as I do now,
and he will set me free–
or so he promised, long ago.

When again I feel my hands,
I’ll rip away these strings
& as he sleeps, I’ll pull them taut
around his bearded throat,
claim his magic for my own.

Poet’s Notes:  Puppets are fun. I made one of papier mache in first grade. I made several along the way in my life, because you can use a puppet to say what you wouldn't dare say in person. A puppet can say the truth without being blamed, or argued with. Everybody loves puppets.

I refreshed my memory with research about puppetry in the middle ages. There's the reference to "fool's scepter" and classical music (Renaissance) later that accompanied the plays. It was entertainment for the hoi polloi, and entertainment for royals as well.

When I wrote this poem, I was thinking of bondage. How people can be commanded and controlled.  Be it through a bad marriage, or sad politics, we all know what "puppets" are. The poor girl (bound by magic) in this poem realizes too late that she fell in love with Mr. Wrong. Now all she has for hope is that someday her master will set her free, perhaps replace her with his current flame. Do you think she has a chance of that?

Editor’s Note:  This poem reminds me of the story of Pinocchio, only pulled inside out and twisted into a tale of horror.  I am also reminded of a patient whom I attended early in my medical career.  He had a terrible, rare, neurological disorder that left him conscious and aware but unable to move, speak, or express himself in any way--something doctors loosely refer to as “locked in syndrome.”  That patient eventually recovered, but, as Ms. Simon hints, it is doubtful that the victim in her poem ever will.

“When Again I Feel My Hands” was first published in Chizine in 2006 and was reprinted in Songs of Eretz Poetry E-zine in November 2013.  The beautiful art accompanying the poem here is one of Ms. Simon’s original illustrations.
Posted by Steven Wittenberg Gordon, MD at 1:37 PM