Poem of the Day: “Wild Waves: A Zip Series” by Lauren McBride

Songs of Eretz Poetry Review is pleased to present “Wild Waves:  A Zip Series” by Lauren McBride.  Mrs. McBride has a Master's Degree in Marine Zoology, which led to a career as a research assistant in molecular biology before she chose to stay at home with her two young children. Later, when she heard from teachers that neither child liked to write, she thought that writing a story together might encourage them. As that story grew in length and complexity, she started to submit short pieces to see if anything would be accepted, and to learn the process. Her poems and stories have appeared or are forthcoming in various sci-fi, fantasy, horror, nature, and children's publications including: The Aurorean, Dreams & Nightmares, The Magazine of Speculative Poetry, Tales of the Talisman, Spaceports & Spidersilk, Star*Line, Scifaikuest (featured poet, August 2010), and The Drabbler (second place, issue 21). 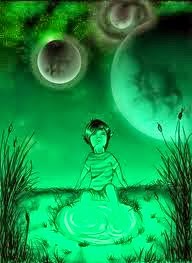 Poet’s Notes:  The ocean, space, and science appear frequently in my writing. I turned to these comfort topics when trying to pen my first zip poem after reading about them in Terrie Leigh Relf's book, The Poet's Workshop and Beyond. Relf says on pages 69 and 70 (new edition), "Not only must a zip have 15 syllables, but it must also be arranged in two lines, with an obvious caesura on each line.  ...They’re often meant to be read across as well as down."

"Wild Waves: A Zip Series" grew from one to three zips that together tell a story. Each zip of two lines can be read across as well as down, but the poem as a whole does not work vertically.  Unfortunately, when the poem appeared in the Autumn 2011 issue of Illumen with the title of "Wild Waves Beneath the Full Moons," it was accidentally printed as two columns without line breaks between the zips.  Taking the advice of a wise friend, I began to title my unusual poems to reflect their form and help convey their meaning.

Editor’s Note:  There are twelve, fun zip couplet mini poems here and three zips in addition to the imaginative whole--sixteen poems in all.  I love the way the shorter poems reinforce and play on the themes and imagery of the longer ones.  “Wild Waves:  A Zip Series” first appeared in the Autumn 2011 issue of Illumen with the title of "Wild Waves Beneath the Full Moons."  It was reprinted in the February 2014 issue of Songs of Eretz Poetry E-zine.
Posted by Steven Wittenberg Gordon, MD at 2:40 PM