Poem of the Day: “And Now the Nectar” by Dominic Daley

Songs of Eretz Poetry Review is pleased to present “And Now the Nectar” by Dominic Daley.  Mr. Daley is a student at the University of Hull, studying for a BA in philosophy with a minor in creative writing. His short fiction has appeared in: Flashes in the Dark, Hellnotes, trapeze magazine, MicroHorror, and 365 tomorrows.

And Now the Nectar
Dominic Daley 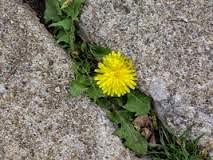 They call me Weed, because why wouldn’t they?
These crowds are bright and prettier than me;
if flaunting for a plastic pot, or vase
that sits at the other end of the world -
or cutting figures in the Petri dish.
I bother no-one, leave my boundaries neat.

But then they dice my hair in thoughtless shapes,
so that I turn my face away from sun.
They coat me in a smarting alchemy
and chase me back within a shallow womb
of roots in which to tangle, choke, then feed.
My alterations ache, then normalize;
the tears in empty space reworking limbs,
the bitter crunch of soil against my teeth
which starts to sit like lead inside my guts.
A Weed suspended in a dirt snapshot.

It takes the months a quarter-turn to force
me squirming from the newly-softened ground.
I taste the yellow jackets, purring calm
on the tip of my effervescent tongue,
and the water, drifting through skin and flesh
alike.
It takes a slow sunset to know
that now I’m sure this puberty was bliss.

Poet’s Notes:  I wrote this poem after thinking about what a mixed bag teenage-hood can be for a lot of people, and how that time of life is a necessary, if often difficult, confusing and painful part of growing into a happier person. Not sure why I chose a weed to represent it; I guess it started out as being a bit more bizarre, in which a kid actually turns into a plant, but I thought the finished result came off as a little closed. It’s in blank verse because I used to write entirely in free, but after getting the hang of iambic pentameter I’ve found it strangely impossible to go back.

Editor’s Note:  What a beautiful poem upon such an humble subject!  Taken literally, the anthropomorphized Weed displays an interesting array of emotions--a gritty determination that is quite inspiring.  Taken as metaphor or conceit, the Weed provides an interesting moral lesson.  “And Now the Nectar” first appeared in the August 2014 issue of Songs of Eretz Poetry E-zine.
Posted by Steven Wittenberg Gordon, MD at 11:24 AM