Songs of Eretz Poetry Review is pleased to present “Nursing Home New Year” by Richard King Perkins II.  Mr. Perkins is a state-sponsored advocate for residents in long-term care facilities. He lives in Crystal Lake, Illinois with his wife and daughter. He is a three-time Pushcart nominee and a Best of the Net nominee whose work has appeared in hundreds of publications including:  The Louisiana Review, Bluestem, Emrys Journal, Sierra Nevada Review, Roanoke Review, The Red Cedar Review, and The William and Mary Review. He has poems forthcoming in:  Sobotka Literary Magazine, The Alembic, Old Red Kimono, and Milkfist. He was a recent finalist in:  The Rash Awards, Sharkpack Alchemy, Writer’s Digest, and Bacopa Literary Review poetry contests.

Human wheelbarrows, carts of dying meat
left to spoil in front of us— 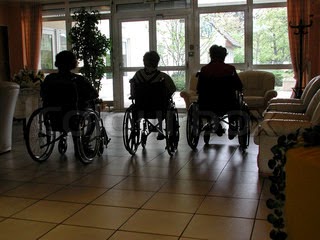 Above the stalled procession of rolling chairs
cut-paper snowmen offer subtle mockery—
tipping back martinis, ringing in their new year.

Somehow, our efforts have given more life
to these placard witnesses
who will one day be called upon to testify
regarding the decay,
that a good time was not had by all

and that they were always above suspicion
in the case of the murders by oblivion.

Poet’s Notes:  I wrote "Nursing Home New Year" in 2005 while waiting to meet with a nursing home administrator. I had only recently become a resident rights advocate (ombudsman) and was shocked at how these residents were arrayed in their wheelchairs around the nurse's rotunda, mouths hanging open, eyes closed against the harsh fluorescent light, not really asleep but yet not awake. It was a shock to see both how staff pretended as if they weren't there and to witness the contrast between the residents’ conditions versus the cavorting snowman cut-outs that had been taped to the wall above them. I wrote the first version of this poem as I sat there waiting to be called.

Editor’s Note:  This poem gives me chills.  The use of metaphor is harsh, jarring, and disturbing as it, sadly, must be, and the sinister, mocking personification of the cut-paper snowmen adds to the sense of horror, revulsion, and injustice.  The moral lesson here is one that we all should learn lest we too suffer the fate of those forgotten figures in the poem.  “Nursing Home New Year” was first published in Children, Churches and Daddies.
Posted by Steven Wittenberg Gordon, MD at 3:26 PM