Poem of the Day: “Commander-In-Chief” by Dusty Wallace

Songs of Eretz Poetry Review is pleased to present “Commander-In-Chief” by Dusty Wallace.  Mr. Wallace lives in the Appalachians of Virginia with his wife and two sons. You can find more of his poetry in Star*Line Issue 36.4 and on MysticNebula.com. 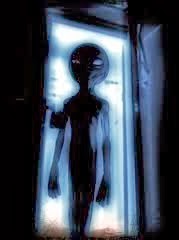 Watched them
with the Hubble’s eye,
a secret mission accomplished.

Feared them,
and their swift fleet,
began to form a strategy.

Found me,
they came quietly,
woke me from a restless sleep.

Told me
they were from the stars,
some place beyond the heliopause.

Showed me
on an ancient chart,
a familiar dot of green and blue.

Touched me
on the forehead,
sharing years of memories.

Helped me
discern my role,
not invaded but invader.

Begged me
to call it off,
the interplanetary barrage.

Warned me
of swift reprisal,
should I pursue aggression.

Left me
under my covers,
sweating, cold and damp.

Poet’s Notes:  Forms are fun, even when non-traditional. “Commander-In-Chief” was the result of building my own template to play with. Aliens are too often the bad guys in science fiction. The fictional government's response is always to shoot first and study later. I thought it'd be nice if the aliens got a chance to be diplomatic for once.

Editor’s Note:  I especially enjoy the relentless two syllable openings of each stanza.  The "not invaded but invader" blows my mind (in a good way).  “Commander-In-Chief” first appeared in Songs of Eretz Poetry E-zine in February 2014.
Posted by Steven Wittenberg Gordon, MD at 11:09 AM