Whitman's Concept of Self

Editor's Note:  This essay was submitted as part of the writing requirement for the edX MOOC Poetry in American:  Whitman, offered by Harvard University.


Whitman’s Concept of Self 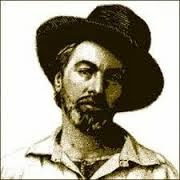 For most, the concept of self is one of exclusion.  One commonly says that the world around oneself is excluded from the self.  Whitman’s concept of the self is the exact opposite.  Whitman saw Whitman everywhere and in everything.  This is no secret that his readers must ferret out.  Whitman brashly proclaims his concept of self throughout “Song of Myself,” perhaps in no place more directly than at the conclusion to the poem:

“I bequeath myself to the dirt to grow from the grass I love,
If you want me again, look for me under your boot-soles.”
[Song of Myself, Section 52]
Here Whitman is saying that when what one would consider to be Whitman himself, in the common meaning of the word “himself,” is dead, his atoms will return to the earth and become a part of earth’s ecosystem.  Absorbed into the fabric of the earth, what was Whitman will remain Whitman--a Whitman just as profound, just as rare, just as wonderful as the grass whose roots his dead body may nourish.
“I believe a leaf of grass is no less than the journey work of the stars,
And the pismire is equally perfect, and a grain of sand, and the egg
of the wren,”
[Song of Myself, Section 31]
For Whitman, his self can never disappear.  Future generations that seek Whitman and Whitman’s wisdom, he promised, will find him beneath their feet in the grass, and may walk on him, with him, or crush him and thereby release his living juices back into the earth.  Whitman’s self is a part of everything and everybody.  It is from his appreciation for and love of the world around him and everything in it that Whitman proclaims his self.  That which is Whitman reaches out to the world, and that which is the world reaches inward toward Whitman.  Whitman helps his readers understand this concept in “Song of Myself” perhaps no more directly than here:
“The city sleeps and the country sleeps,
The living sleep for their time, the dead sleep for their time,
The old husband sleeps by his wife and the young husband sleeps by his wife;
And these tend inward to me, and I tend outward to them,
And such as it is to be of these more or less I am,
And of these one and all I weave the song of myself.”