Poem of the Day: "Phantasmagoria Canto I (The Trystyng)" by Lewis Carroll

"Phantasmagoria Canto I (The Trystyng)" by Lewis Carroll is the Songs of Eretz Poem of the Day for March 26, 2014.  It is in the public domain and is reprinted below in its entirety.  The poem is the opening Canto in a series of seven first published in 1869 in the collection Phantasmagoria and Other Poems.  A link to the free Gutenberg eBook Project version of the collection may be found here:  http://www.gutenberg.org/files/651/651-h/651-h.htm. 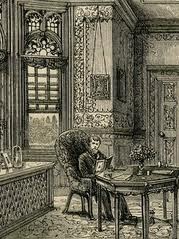 Phantasmagoria Canto I (The Trystyng)
by Lewis Carroll

ONE winter night, at half-past nine,
Cold, tired, and cross, and muddy,
I had come home, too late to dine,
And supper, with cigars and wine,
Was waiting in the study.

There was a strangeness in the room,
And Something white and wavy
Was standing near me in the gloom -
I took it for the carpet-broom
Left by that careless slavey.

But presently the Thing began
To shiver and to sneeze:
On which I said "Come, come, my man!
That's a most inconsiderate plan.
Less noise there, if you please!"

"I've caught a cold," the Thing replies,
"Out there upon the landing."
I turned to look in some surprise,
And there, before my very eyes,
A little Ghost was standing!

He trembled when he caught my eye,
And got behind a chair.
"How came you here," I said, "and why?
I never saw a thing so shy.
Come out! Don't shiver there!"

He said "I'd gladly tell you how,
And also tell you why;
But" (here he gave a little bow)
"You're in so bad a temper now,
You'd think it all a lie.

"And as to being in a fright,
Allow me to remark
That Ghosts have just as good a right
In every way, to fear the light,
As Men to fear the dark."

"No plea," said I, "can well excuse
Such cowardice in you:
For Ghosts can visit when they choose,
Whereas we Humans ca'n't refuse
To grant the interview." 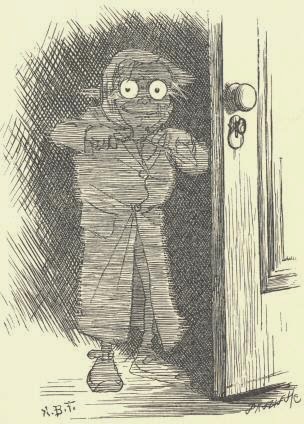 He said "A flutter of alarm
Is not unnatural, is it?
I really feared you meant some harm:
But, now I see that you are calm,
Let me explain my visit.

"Houses are classed, I beg to state,
According to the number
Of Ghosts that they accommodate:
(The Tenant merely counts as WEIGHT,
With Coals and other lumber).

"This is a 'one-ghost' house, and you
When you arrived last summer,
May have remarked a Spectre who
Was doing all that Ghosts can do
To welcome the new-comer.

"In Villas this is always done -
However cheaply rented:
For, though of course there's less of fun
When there is only room for one,
Ghosts have to be contented.

"That Spectre left you on the Third -
Since then you've not been haunted:
For, as he never sent us word,
'Twas quite by accident we heard
That any one was wanted.

"A Spectre has first choice, by right,
In filling up a vacancy;
Then Phantom, Goblin, Elf, and Sprite -
If all these fail them, they invite
The nicest Ghoul that they can see.

"The Spectres said the place was low,
And that you kept bad wine:
So, as a Phantom had to go,
And I was first, of course, you know,
I couldn't well decline."

"No doubt," said I, "they settled who
Was fittest to be sent
Yet still to choose a brat like you,
To haunt a man of forty-two,
Was no great compliment!"

"I'm not so young, Sir," he replied,
"As you might think. The fact is,
In caverns by the water-side,
And other places that I've tried,
I've had a lot of practice:

"But I have never taken yet
A strict domestic part,
And in my flurry I forget
The Five Good Rules of Etiquette
We have to know by heart."

My sympathies were warming fast
Towards the little fellow:
He was so utterly aghast
At having found a Man at last,
And looked so scared and yellow.

"At least," I said, "I'm glad to find
A Ghost is not a DUMB thing!
But pray sit down: you'll feel inclined
(If, like myself, you have not dined)
To take a snack of something:

"Though, certainly, you don't appear
A thing to offer FOOD to!
And then I shall be glad to hear -
If you will say them loud and clear -
The Rules that you allude to."

"Thanks! You shall hear them by and by.
This IS a piece of luck!"
"What may I offer you?" said I.
"Well, since you ARE so kind, I'll try
A little bit of duck.

"ONE slice! And may I ask you for
Another drop of gravy?"
I sat and looked at him in awe,
For certainly I never saw
A thing so white and wavy.

And still he seemed to grow more white,
More vapoury, and wavier -
Seen in the dim and flickering light,
As he proceeded to recite
His "Maxims of Behaviour." 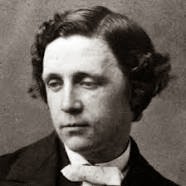 The renowned British author and poet, Lewis Carroll (1832 - 1898), was born Charles Lutwidge Dodgson.  He is perhaps most famous for his fantasy novellas, Alices's Adventures in Wonderland (1865) (reviewed in Songs of Eretz May 14, 2012 http://eretzsongs.blogspot.com/2012/05/review-of-lewis-carrolls-alices.html), and Through the Looking-Glass (1872) (reviewed in Songs of Eretz September 18, 2012 http://eretzsongs.blogspot.com/2012/09/review-of-through-looking-glass-by.html.  However, he was also a prolific poet; he included many memorable poems within the aforementioned novellas and authored several free-standing poetry collections.  For his "day job," he was a Professor of Mathematics at the Christ Church College in Oxford.  Reference to this and additional biographical information may be found here:  http://www.poets.org/poet.php/prmPID/78.

The reaction of the first person singular character in the poem, presumably the poet, to his haunting is unexpected, funny, and excruciatingly nonchalant.  The reaction of the phantom to this reaction is even more unexpected and funnier still.  The eventual outcome, with the phantom sitting down and sharing supper and conversing with the subject of his haunting, is simply delicious.  There is also a pun worth mentioning:  "He was so utterly aghast"--a pun on "a ghast"--bazinga!

Posted by Steven Wittenberg Gordon, MD at 11:42 AM