Poem of the Day: "Churn" by Literata

"Churn" by Literata is the Songs of Eretz Poem of the Day for March 20, 2014.  It appears in the 2014 Spring Equinox issue of Eternal Haunted Summer.  A link to the poem, as well as a brief bio of the poet, may be found here:  http://eternalhauntedsummer.com/issues/spring-equinox-2014/churn/. 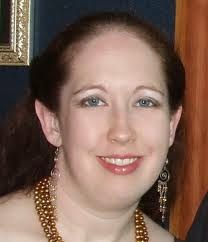 According to her website which may be found here:  http://worksofliterata.org/about-literata/, Literata (pictured in photograph left) is an "ordained High Priestess with the Order of the White Moon." She considers her cigarette lighter to be "consecrated as a sacred flame to Brigid."  Her poetry has appeared in several serials, and she served as editor of the anthology Crossing the River. The triple goddess Brigid (pictured in illustration right), the subject of "Churn," was considered by the Celts to be, among many other things, the goddess of poetry.  More about the legends surrounding this Celtic goddess may be found here:  http://www.goddessgift.com/goddess-myths/celtic-goddess-brigid.htm.  Saint Brigid aka the first Abbess of Kildare (pictured in illustration below left), was once as important to the Irish as Saint Patrick (and perhaps still may be, despite her "decanonization" by the Vatican in the 1960s).  Additional information about her  may be found here:  http://www.goddessgift.com/goddess-myths/saint-brigid.htm.

"Churn" is an invocation that a poet might make to Brigid before composing a poem.  Here Brigid is revealed as the "goddess of dairymaids and poets," making the conceit of butter churning as metaphor for composing poetry both satisfying and compelling.

Saying a prayer or invoking the Muse before composing a poem is an ancient poetic tradition.  I have not been in this habit, and my Jewish side is a bit repulsed by the idea.  My Catholic side may have no recourse, as Saint Brigid was "decanonized."  However, I must admit that my fay Irish side is intrigued by Literata's poem and by what reciting it might do for me and my work.
Posted by Steven Wittenberg Gordon, MD at 11:52 AM