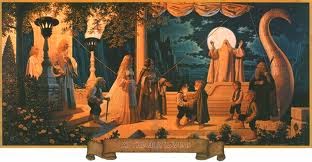 "Bilbo's Last Song" by J. R. R. Tolkien is the Songs of Eretz Poem of the Day for March 16, 2014.  A link to the poem, including some interesting facts about the poem's history, may be found here:  http://tolkiengateway.net/wiki/Bilbo%27s_Last_Song.  A rousing presentation set to music may be found here:  https://www.youtube.com/watch?v=Xp6nmOjqXAo. 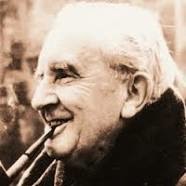 John Ronald Reuel Tolkien (pronounced tol-keen with equal syllabic stress) (1892 - 1973) (pictured) was a Professor of Anglo-Saxon (Old English) at Oxford.  He is most famous for his fantasy epic trilogy, The Lord of the Rings, and is considered by may scholars to be the father of fantasy fiction.  His poetry is scattered throughout the trilogy, as well as throughout its prelude, The Hobbit.  An interesting and extensive biography may be found here:  http://www.tolkiensociety.org/tolkien/biography.html.

"Bilbo's Last Song" was not included in The Lord of the Rings, but, had it been, it would have been sung by Bilbo near the end of The Return of the King as a farewell to his friends and to Middle Earth just before he boarded the last ship in the Grey Havens (pictured above) bound for the lands to the West, the final home of the undying elves.  The song evokes the yearning of much of mankind to leave the old world behind and to seek the promised land, a land of hopes and dreams--the call of the sea, whether literal or figurative, ever guided by a Star.
Posted by Steven Wittenberg Gordon, MD at 12:41 PM