Poem of the Day: "In the City of Night" by John Gould Fletcher

"In the City of Night" by John Gould Fletcher is the Songs of Eretz Poem of the Day for March 29, 2014.  It is also Poets.org's Poem-A-Day feature for the same date.  Since it was first published in 1921, it is in the public domain and, therefore, can be and has been legally reprinted here.


In the City of Night
by John Gould Fletcher

(To the Memory of Edgar Allan Poe) 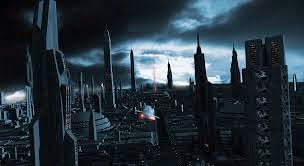 Wrap me in your folds of shadow.

City of twilight,
City that projects into the west,
City whose columns rest upon the sunset, city of square,
threatening masses blocking out the light:
City of twilight,
Wrap me in your folds of shadow.

City of midnight, city that the full moon overflows, city where
the cats prowl and the closed iron dust-carts go rattling
through the shadows:
City of midnight,
Wrap me in your folds of shadow.

City of early morning, cool fresh-sprinkled city, city whose
sharp roof peaks are splintered against the stars, city that unbars tall haggard gates in pity,
City of midnight,
Wrap me in your folds of shadow.

City of rain, city where the bleak wind batters the hard drops
once and again, sousing a shivering, cursing beggar who clings amid the stiff Apostles on the cathedral portico;
City where the glare is dull and lowering, city where the
clouds flare and flicker as they pass upwards, where sputtering lamps stare into the muddy pools beneath them;
City where the winds shriek up the streets and tear into the
squares, city whose cobbles quiver and whose pinnacles waver before the buzzing chatter of raindrops in their flight;
City of midnight,
Drench me with your rain of sorrow.

City of vermilion curtains, city whose windows drip with
crimson, tawdry, tinselled, sensual city, throw me pitilessly into your crowds.
City filled with women's faces leering at the passers by,
City with doorways always open, city of silks and swishing
laces, city where bands bray dance-music all night in the plaza,
City where the overscented light hangs tepidly, stabbed with
jabber of the crowd, city where the stars stare coldly, falsely smiling through the smoke-filled air,
City of midnight,
Smite me with your despair.

City of emptiness, city of the white façades, city where one
lonely dangling lantern wavers aloft like a taper before a marble sarcophagus, frightening away the ghosts;
City where a single white-lit window in a motionless
blackened house-front swallows the hosts of darkness that stream down the street towards it;
City above whose dark tree-tangled park emerges suddenly,
unlit, uncannily, a grey ghostly tower whose base is lost in the fog, and whose summit has no end.
City of midnight,
Bury me in your silence.

City of night,
Wrap me in your folds of shadow.

City of feverish dreams, city that is being besieged by all the
demons of darkness, city of innumerable shadowy vaults and towers, city where passion flowers desperately and treachery ends in death the strong:
City of night,


Wrap me in your folds of shadow.

John Gould Fletcher (pictured) was born in Arkansas in 1886 and deliberately drowned himself in 1950.  He became independently wealthy thanks to an early inheritance from his banker father, and spent most of his early poetic career as an expatriate in Italy, France, and England.  He was involved with the Imagist movement and later the Fugitive movement, and hobnobbed with the famous literati of his day, including Ezra Pound, Amy Lowell, Ford Maddox Ford, and W. B. Yeats.  He received the Pulitzer Prize for his Selected Poems in 1939.  Reference to this and other biographical information may be found here:  http://www.poetryfoundation.org/bio/john-gould-fletcher.


Fletcher dedicated "In the City of Night" to Edgar Allan Poe, one of the poets who influenced him greatly during his early, lonely years in Arkansas.  Certainly, the dark mood and the chorus-like use of the final two lines of each stanza are characteristic of Poe.  However, I see more of Walt Whitman than Poe here.  The use of:  anaphora, internal rhyme, alliteration, assonance, consonance, the listing of the various elements--both good and bad--of the city, the subject of the city itself, and the expressed desire to become part of or wrapped into the substance or essence of the city are all Whitmanian in character.
Posted by Steven Wittenberg Gordon, MD at 10:09 PM