Poem of the Day: "The Hippopotamus" by t.s. eliot

"The Hippopotamus" by t.s. eliot is the Songs of Eretz Poem of the Day for March 23, 2014.  The poem is in the public domain and is reprinted here:

The broad-backed hippopotamus
Rests on his belly in the mud;
Although he seems so firm to us
He is merely flesh and blood. 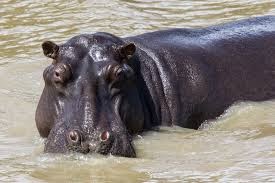 Flesh-and-blood is weak and frail,
Susceptible to nervous shock;
While the True Church can never fail
For it is based upon a rock.

The hippo's feeble steps may err
In compassing material ends,
While the True Church need never stir
To gather in its dividends.

The 'potamus can never reach
The mango on the mango-tree;
But fruits of pomegranate and peach
Refresh the Church from over sea.

At mating time the hippo's voice
Betrays inflexions hoarse and odd,
But every week we hear rejoice
The Church, at being one with God.

The hippopotamus's day
Is passed in sleep; at night he hunts;
God works in a mysterious way--
The Church can sleep and feed at once.

I saw the 'potamus take wing
Ascending from the damp savannas,
And quiring angels round him sing
The praise of God, in loud hosannas.

Blood of the Lamb shall wash him clean
And him shall heavenly arms enfold,
Among the saints he shall be seen
Performing on a harp of gold.

He shall be washed as white as snow,
By all the martyr'd virgins kist,
While the True Church remains below


Wrapt in the old miasmal mist. 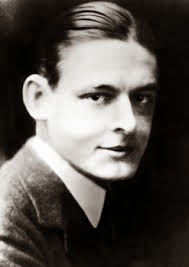 Thomas Stearns Eliot (1888 - 1965) (pictured) received the Nobel Prize for Literature in 1948.  His The Waste Land (1922) is considered by many scholars to be the most influential poetic work of the twentieth century.  He was also a notable critic and playwright in his day.  Additional biographical information may be found here:  http://www.poets.org/poet.php/prmPID/18.

"The Hippopotamus" is a traditional ballad comprised of nine quatrains of rhyming iambic tetrameter.  The hippopotamus is used as a conceit to contrast its animal innocence and purity of spirit with the "True Church" where those characteristics are sadly often wanting.  Given the cynical nature of this poem, it is interesting to note that Eliot converted to orthodox Christianity in the late 1930s.