Poem of the Day: "The Yonghy-Bonghy-Bo" by Edward Lear

"The Yonghy-Bonghy-Bo" by Edward Lear is the Songs of Eretz Poem of the Day for March 22, 2014.  The poem is in the public domain and is reprinted here along with the illustration that accompanied it in Lear's collection:

The Yonghy-Bonghy-Bo,
whose Head was ever so much bigger than his
Body, and whose Hat was rather small. 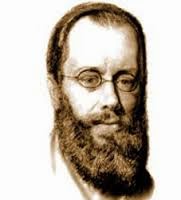 Edward Lear (1812 - 1888) (pictured) was well-known during his lifetime as a painter and illustrator, particularly of birds and landscapes, as well as for being the author of a respected series of illustrated travel books.  However, he is best remembered today as being the author of volumes of nonsense poetry, eclipsed perhaps only by his contemporary, Lewis Carroll, in this regard.  Additional biographical information about this irreverent poet may be found here:  http://www.poets.org/poet.php/prmPID/140.

Lear composed a longer and probably more well-known poem about the man with the large head and diminutive hat, "The Courtship of the Yonghy-Bonghy-Bo."  A link to this poem may be found here:  http://www.poemhunter.com/poem/the-courtship-of-the-yonghy-bonghy-bo/.

However, the shorter poem presented here, really no more than a caption accompanying the illustration of the hyper-cephalic hero, has a haiku-like, memorable quality that has always made me smile.  Speaking as one who had the biggest head in his college graduating class--figuratively perhaps, but most definitely literally (I checked at the time)--I also cannot help but to identify personally with this humanoid version of Oswald the Octopus (pictured here accompanied by his faithful dog, Weenie).
Posted by Steven Wittenberg Gordon, MD at 10:39 AM