Poem of the Day: "Lovers on Aran" by Seamus Heaney

"Lovers on Aran" by Seamus Heaney is the Songs of Eretz Poem of the Day for St. Patrick's Day 2014.  A link to the poem, that will also lead to many other poems by the same poet, may be found here:  http://famouspoetsandpoems.com/poets/seamus_heaney/poems/12725. 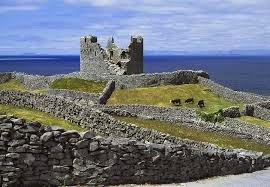 Seamus Heaney (1939 - 2013) (pictured) was awarded the Nobel Prize in Literature in 1995 "for works of lyrical beauty and ethical depth, which exalt everyday miracles and the living past."  He held professorships at Harvard and Oxford.  A native of Northern Ireland, he is widely recognized as one of the major poets of the twentieth century.  As Blake Morrison noted, Heaney was "that rare thing, a poet rated highly by critics and academics yet popular with the 'common reader.'"  In 2008, two thirds of the poetry collections sold in the UK were composed by Heaney.  Additional biographical information may be found here:  http://www.poetryfoundation.org/bio/seamus-heaney. 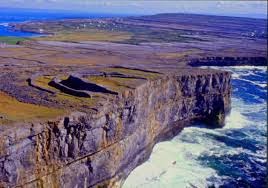 Ireland's Aran Islands (pictured x3) are located at the mouth of Galway Bay.  The three islands are cold, rocky, austere, and constantly pounded by the violent waves of the Atlantic Ocean.  The locals, who speak both Gaelic and English, are fond of saying that they live at the "western edge of Europe," and that "the next parish over is in Boston."  Additional information about the Aran Islands may be found here:  http://www.ricksteves.com/watch-read-listen/read/articles/irelands-aran-islands-bleak-and-beautiful. 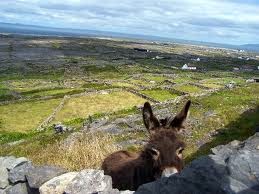 The rhythm, assonance, consonance, alliteration, and rhyme in "Lovers on Aran" evoke the sights, sounds, and even the feel of the Atlantic Ocean crashing into the land, certainly, but there is much more to the three triplets that comprise the poem.  As I read, I felt a sense of yearning, of reaching toward Ireland from Kansas, my arms thrown out like the Islands' "wide arms of rock."

Who are the "lovers?"  They could be the land and the sea, Ireland and America, the poet and Ireland, unnamed actual lovers inspired to ravage each other just as the sea ravages the rocks, or perhaps a combination of all of these.

Posted by Steven Wittenberg Gordon, MD at 9:39 AM