Poem of the Day: "The First Steps" by Edgar Albert Guest 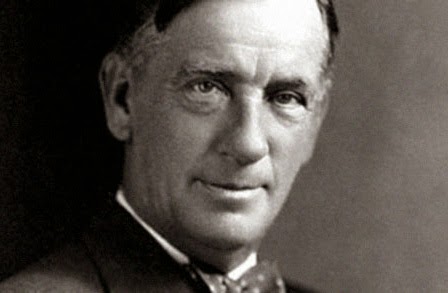 "The First Steps" by Edgar Albert Guest is the Songs of Eretz Poem of the Day for March 19, 2014.  A link to the poem, including a brief bio and links to other poems by the same poet, may be found here:  http://allpoetry.com/poem/8471297-The-First-Steps-by-Edgar-Albert-Guest.  The selection of this poem was suggested by my mother who recalls witnessing my first steps on a long ago March 19 when I was ten-months old.  It was the most athletic thing I ever did.

Edgar Albert Guest (1881 - 1959) (pictured) was the author of an immensely popular syndicated newspaper column called "Chaff" that consisted of an original poem every day and ran for decades.  His many poetry collections were immensely popular as well--one of them, Just Folks, in which "The First Steps" appeared, sold over one million copies.  Additional information about this poet may be found here:  http://www.poetryfoundation.org/bio/edgar-albert-guest.

I'll admit it:  I'm jealous of Mr. Guest.  He lived the dream of making a living as a poet--and a good living at that.  Imagine!  He became a millionaire by writing heartwarming, if simple and sentimental, poetry aimed at "just folks."  He has few peers as a twentieth century poet of the masses--off hand, I can only offer Seamus Heaney and Dr. Seuss.