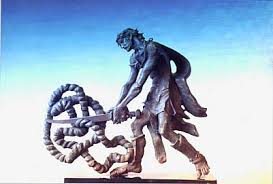 I invented a new poetry form today which I have dubbed the Gordonian Knot.  The following is a brief description.

The Gordonian Knot poetry form is a palindrome centered on a single, central word, always the second of exactly three lines, which is also the theme or central element of the poem.  The first and third lines may be of any length (some knots are short, others are long).  The third line must use the same words as the first line only in exact reverse order, thus creating a palindrome.  The entire poem should be presented centered, not flush left or right.  The first and third lines must serve to crystallize or resonant with the central theme word.  Slight differences in the words of the first and third lines, such as having the singular form of a word in the first line appear as a plural in the third line, are permissible but not ideal.  Punning is desirable.  Poetic license is allowed and often necessary.  Punctuation should be used sparingly if at all.  Whether or not to capitalize the first word of each line is up to the poet.  A title is optional, but if used should be along the lines of, “[Central Word]:  A Gordonian Knot,” or “A Gordonian Knot on [Central Word].”

Gordonian Knots are fun but challenging to compose.  So far, I have written five of them:  Blue (mainstream), Demons (horror), House (horror), Red (science fiction), & Teeth (horror).  It will be interesting to see if the form ever catches on.

A "knot" analogy is part of the form.  The central word is the base of the knot.  The first and third lines are the ties used to create the knot, each pulling in the opposite direction.  A Gordonian Knot may be read as a single poem from beginning to end or as two poems by pausing at the second line, repeating the second line, and then proceeding to the end.