Story Versus Snapshot: Two Versions of "Young Woman at a Window"

For my Modern & Contemporary American Poetry MOOC, I was asked to compare two versions of "Young Woman at a Window" by William Carlos Williams (scroll to the bottom for the poems) and then write an essay given the following prompt:

What makes the second version of "Young Woman at a Window" more imagist than the first version of the poem? How does it conform to the principles and ideas of imagism as they are declared in the manifesto more effectively or more successfully or more faithfully than does the first version?

Story Versus Snapshot:  Two Versions of "Young Woman at a Window"

The Imagist Manifesto states that most imagists “believe that concentration is of the very essence of poetry.”  With its opening words, the first version of William Carlos Williams’ “Young Woman at a Window” presents itself as less imagist than the second version due to the former’s complete failure to follow this tenet.

In the first version, the poem opens with, “While she sits.”  The reader is led to believe that “while she sits,” something else eventually is going to happen.  This “something” is not described until the fourth stanza:  “this little child / who robs her.”  The lack of adherence to the principle of concentration is compounded in this revelation by use of the word “this” to describe the child--“this” being more nebulous and therefore less concentrated than “the.”

In contrast, the second version opens with, “She sits.”  This is a concentrated statement.  “She sits” is happening immediately, right now.  An image is instantly formed of a female sitting.

The Imagist Manifesto further states that the poet’s goal should be “to produce a poetry that is hard and clear, never blurred nor indefinite.”  Again, straight off in the first stanza, the first version of the poem violates this principle; the second version follows it.

The opening stanza of the first version of the poem is, “While she sits / there.”  The use of “there” begs the question, “Where, exactly?”  This is definitely indefinite.  The image is already blurred, and the poem has only just begun.

In contrast, the second version of the poem opens with, “She sits with / tears on.”  Immediately, the image is formed of a seated female crying.

Of course, the primary goal of the imagist poet, as stated in the Manifesto, is “to create an image.”  The first version of the poem violates this principle almost completely, while the second version almost completely adheres to it.

The first version of the poem tells a story of sorts and as a natural result raises questions in the mind of the reader.  Why is the woman crying?  Who is this child?  What did the child do to make the woman cry?  What exactly was the “theft” or “robbery?”  Was the woman’s career or social life “stolen?”  Did the child actually steal something and cause disgrace to the woman?  All of these questions act to distract the reader, to cause the reader to wonder what happened.  Multiple images are formed.  This is not necessarily a bad result--unless an imagist poem is the goal.

In contrast, the second version of the poem employs an economy of words to emphasize a single, clear image instead of (or at the expense of) telling a story.  The reader sees a seated woman with tears on her cheek, her cheek in her hand, a child in her lap.  The child has his nose pressed up against “the glass,” presumably the window through which the poet observes this scene.  A story is begged, of course, but the emphasis is on the creation of the image--a snapshot or a captured moment--the essence of imagism. 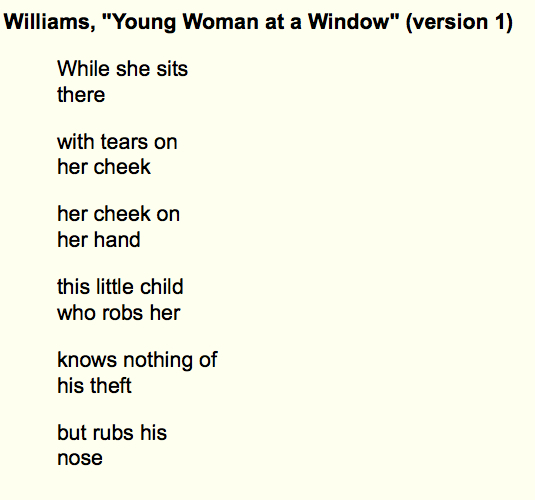 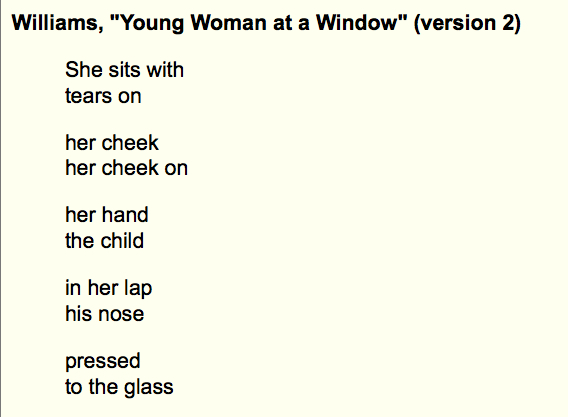