Review of "Forms of Range and Loathing" by Ruth Ellen Kocher

"Forms of Range and Loathing" by Ruth Ellen Kocher, a teacher at the University of Colorado-Boulder, was offered by Poets.org's Poem-A-Day on October 23, 2013.  A link to the poem, including the poet's notes, may be found here: 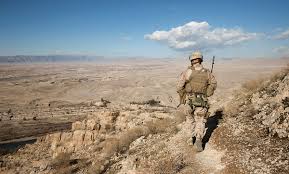 The poem consists of twelve stanzas separated by long blank spaces on the page.  The form emphasizes the separation that the soldier-speaker in the poem feels as he describes the desert battlefield he faces far away from home.  The second half of the poem has the soldier-speaker pondering a televised trial of a man accused of murdering his wife.  The man stands accused mainly because he failed to express grief over the killing, but the soldier understands the man's detachment in this stressful situation.
Posted by Steven Wittenberg Gordon, MD at 5:10 PM