Review of "To My Best Friend's Big Sister" by Ross Gay

"To My Best Friend's Big Sister" by Ross Gay, a teacher at Indiana University in Bloomington and Drew University, was offered by Poets.org's Poem-A-Day on October 11, 2013.  A link to the poem may be found here:

The poem describes a sexual encounter, presumably the poet's first, between a teenaged boy and an older, more experienced girl, his best friend's sister.  All the insecurity, conflicted feelings, and low self-esteem that can accompany such a situation are punctuated by the poem's short, clipped lines of rapidly flowing free verse. 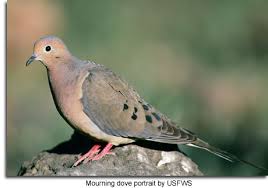 About mid-way through, the narrative changes from the awkward sexual encounter to the speaker's recent memory of freeing a trapped mourning dove (pictured).  The dove is a metaphor for the speaker's innocence and innate goodness of character.

The poem ends with an admission that the poet is struggling to describe how he actually felt and what actually happened during his first sexual experience without embellishment or exaggeration.  He admits that he was not really ready, "having never made love to himself," and that, unfortunately, this would be only the first of many awkward sexual encounters to follow over a period of fifteen years.  The poem should resonate with feminists and non-feminists alike, as it shows the male figure not as a stereotypical stud but as a vulnerable human being, with the more experienced female figure in control of the situation.
Posted by Steven Wittenberg Gordon, MD at 12:47 PM