Review of "A Conceit" by Rae Armantrout

"A Conceit" by Rae Armantrout was offered by Poets.org's Poem-A-Day on October 30, 2013.  A link to the poem, including the poet's notes, may be found here:

Rae Armantrout (b. 1947) won a Pulitzer Prize in 2010 for her book of poems entitled Versed.  She has published numerous additional volumes of poetry, and her poems have been anthologized widely.  She is Professor of Poetry and Poetics at the University of California, San Diego.  A detailed biography may be found here: 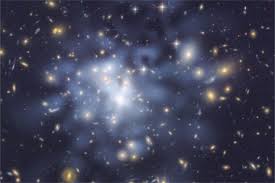 The poem is divided into three sections, and a play on the various meanings of "vacuum" is found in each.  The first section consists of the inane (or vacuous) banter of television news anchors.  In the second section, the concept of "vacuous self-absorption" arises.

The poem closes by comparing conceit to "the vacuum energy."  The poet reveals in her notes that this refers to dark matter, whose property of repulsion is thought to be the reason for the universe's expansion.  "Repulsion" may also perhaps be read as "repellent," which brings the poem back to the repulsive antics of the anchors in the first section.
Posted by Steven Wittenberg Gordon, MD at 9:51 PM