"poem I wrote sitting across the table from you" by Kevin Varrone, a teacher at Temple University, was offered by Poets.org's Poem-A-Day on October 17, 2013.  A link to the poem may be found here: 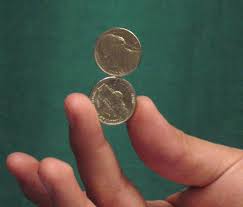 The object of this poem, the "you," I imagine to be a pretty girl sitting across the table from the poet.  The poet wishes he were rich, that he had "two nickels to rub together."  Using a cliche such as this can ruin an otherwise good poem, but Mr. Varrone leverages the cliche, makes it work (there are two more cliches for you) by going on to imagine that the friction produced will start a fire--a metaphor for the unattainable pretty girl falling in love with him.  The nickels would "[burn] a hole in [his] pocket," (another cliche), but the poet extends the metaphor as he ends the poem with winding up with the girl in his "pocket"--there because he was able to "grab [her] hand," pull her in, and "disappear" into "the pocket of [him]self."
Posted by Steven Wittenberg Gordon, MD at 7:53 PM