Poem of the Day: “Seven Heartbeats and a Hundred Yards” by James Frederick William Rowe

Songs of Eretz Poetry Review is pleased to present “Seven Heartbeats and a Hundred Yards” by James Frederick William Rowe.  Mr. Rowe is an author and poet out of Brooklyn, New York, with works appearing in:  Heroic Fantasy Quarterly (where he is an assistant editor), Big Pulp, Tales of the Talisman, Bete Noire, and Andromeda Spaceways Inflight Magazine.  He is pursuing a Ph.D. in philosophy, is an adjunct professor in the CUNY system, and works in a variety of freelance positions.  Contact him at http://jamesfwrowe.wordpress.com. 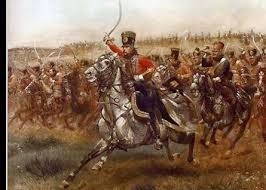 Fly, the wing'ed sabre on charging mount
The angel of the grave is a sluggard
Only once must death be met ‘fore the shock
Trust the saviour of the sword: Sainted Speed!

Collide, and in the collision shatter
The line can not endure the hammer-blow
In disarray the mob of muskets fall
Flashing swords! The Harvest of Rout rejoined

The reaping blades sever red poppy heads
Scattered, the blossoms fly from scything strokes
Stalks spread and strewn beneath the tramp'ling hooves
The stray petals shall not escape the same

Seeped in the scarlet liquor of lifeblood
And amidst brother blades jointly jutting
Now the war-winning sabre skyward swings
Jubilant, these hearts unpierced at eight beats

Poet's Notes:  I wanted to employ the language of the poem in such a way as to convey the speed and danger of the charge. These men gambled their lives in every charge they undertook and could only rely on the tremendous speed of their horses to save them from being shot to pieces. As this is crucial to understanding what must have been the thrill of the experience, I made a point to fixate on it as the main theme of both the first and last two stanzas of the piece. In contrast, the middle stanzas detail the bloody triumph of the charge's success where courage is rewarded with victory, a point no less important to conveying the whole experience of the charge.

In addition, I sought to pick a form of poetry suited to the subject matter. This was not at all a difficult choice, as I found in blank verse the perfect match for aesthetic and historical reasons. Both Shakespeare and Milton composed much of their poetry in blank verse in a time when the cavalry charge was at its height of effectiveness. It seemed only fitting to take the style of historic poets and apply it to the subject matter contemporary with them. Aesthetically, the meter also provided a certain structure to the poem, while the lack of rhyme allowed me to introduce non-rhyming elements, as in the usage of alliteration spread throughout. I also avoided enjambment to produce a rhythm that I thought important to a poem that details a fundamentally rhythmic experience (of the heart's beating and the movement of the horse).

Editor’s Note:  “Seven Heartbeats and a Hundred Yards” really captures the thrills and dangers of a cavalry charge and saber battle.  The words of the poem leap off the page and plunge the reader into the heat of war.  This is not easily done.  The words "Shakespearean" and "epic" come to mind.  I was reminded of a passage in a biography of Theodore Roosevelt that I read some time ago that described the former president’s famous charge up San Juan Hill.  “Seven Heartbeats and a Hundred Yards” was first published in the November 2013 issue of Songs of Eretz Poetry E-zine.
Posted by Steven Wittenberg Gordon, MD at 8:26 PM