Poem of the Day: “Primal Menagerie” by Marge Simon

Songs of Eretz Poetry Review is pleased to present “Primal Menagerie” by Marge Simon.  Ms. Simon's poetry, fiction, and illustrations have appeared in publications such as Strange Horizons, Niteblade, Daily Science Fiction Magazine, Pedestal, and Dreams & Nightmares. She is a former president of the Science Fiction Poetry Association (SFPA) and has served as editor of Star*Line, its journal. She won the Rhysling Award for Best Long Poem in 1995. She edits a column for the Horror Writers Association (HWA) Newsletter, "Blood & Spades: Poets of the Dark Side" and serves as Chair of the board of trustees.  She won the Strange Horizons Readers Choice Award in 2010 and the Dwarf Stars Award in 2012. In addition to her poetry, she has published two prose collections: Christina's World, Sam's Dot Publications (2008) and Like Birds in the Rain, Sam's Dot (2007). She was awarded the Bram Stoker for Best Poetry Collection twice (2007 & 2012). Both of her 2011 poetry collections, Unearthly Delights and The Mad Hattery were Stoker finalists. Elektrik Milk Bath Press published a collection with Sandy DeLuca, Dangerous Dreams, in 2013.  She is an active member in the HWA, Science Fiction & Fantasy Writers of America (SFWA), and SFPA.  Find out more about Ms. Simon at www.margesimon.com. 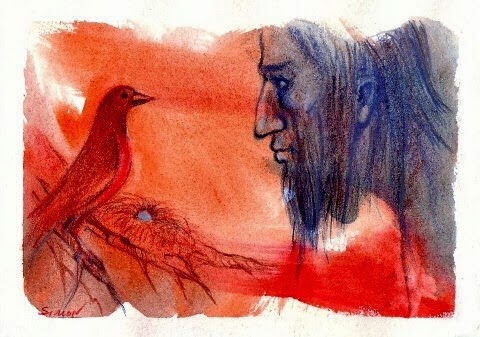 Compatible partners, yet both of us sterile,
we accept our social obligation.

They warn us that random accidents
are virtually impossible to control.

But we take the risk, give our DNA
samples to the Genesis laboratory

where they create her in a tube.
The day comes we can take her home.

The first winter snow, she nearly dies,
so we move her cage into our shelter.

Her digestive system proves incompatible
with ours, we must purchase costly supplements.

Her daily needs soon surpass our means,
we have but one alternative to save her.

We visit her on Sunday afternoons
with other parents of failed experiments.

The keeper tells us our child is bright,
and how she has learned to speak.

We know he lies to keep us happy,
the sounds she makes hurt our ears.

Her fur is long and black, yet it grows
only on her head, her skin is sickly pale.

We tell ourselves this child can't be ours
and leave her in this primal menagerie,

knowing she owns all our Sundays
for the next few hundred years.

Poet’s Notes:  This poem is set in a far distant future society on Earth where our descendants have changed and adapted to a world we can only begin to imagine. Life partners are expected to procreate, but find they are sterile. They opt for a test tube child. To their credit, they attempt to care for her, but (to them) she turns out to be not only deformed, but also mentally challenged. They place her in a care unit. Of course, she would be considered a normal healthy human child in our era. In the end, as parents, she claims their love. It's a simple thing, parental love. I liked this theme so much; I've written and published at least two more along those lines--some as flash fiction. They address some heavy issues when it comes to parenting, and social pressures, though I do it from a science fiction approach.

Editor’s Note:  “Primal” means “primitive.”  Interestingly, it has the same root as “primate.”  So, right from reading the title, this poem had my mind racing with disturbing thoughts and questions.  What if I became the parent of a child that was a throwback to a primitive hominid or ape-like creature?  What would I do?  Am I supposed to feel bad for the parents in this poem, or for their offspring, or perhaps for the zookeeper?  I pondered these questions for a while but could find no good answers.

“Primal Menagerie” first appeared in Tales of the Talisman in 2012 and was reprinted in Songs of Eretz Poetry E-zine in January 2014.  The graphic that accompanies today's feature is an original illustration by the poet.
Posted by Steven Wittenberg Gordon, MD at 9:48 PM