Poem of the Day: “The Immigrant Looks Back” by Daniel Ausema

Songs of Eretz Poetry Review is pleased to present “The Immigrant Looks Back” by Daniel Ausema.  Mr. Ausema's poetry has also appeared in Strange Horizons, Dreams & Nightmares, and many other publications. He is the creator of the steampunk fantasy serial fiction project Spire City and writer of many short stories. He lives at the foot of the Rocky Mountains in Colorado.

The Immigrant Looks Back
Daniel Ausema

My home is behind me. 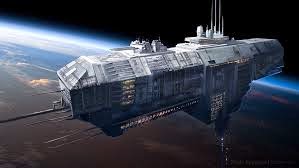 Dirty skies already hide
the strip-mined landscape,
the oil-slicked seas.
The planet's beauty, too,
for all that, vanishing
into a haze of particulates.
Majestic formations and
wonders of ingenuity,
laced with poisons and
etched by acids, but still
able to inspire awe.
No longer my home.

Does that make this shell
my home? This tube of gadgetry
and insulation? These cramped
passages and cupboards?
The novelty fades faster than the planet.

A new home waits, sure.
A strange-colored star,
a new range of vistas, new patterns
to the winds and leaves.
I know the stats and specs,
the major flora and fauna,
the number of limbs and petals,
can picture a new life,
dream dreams of waking to
the scents that will come to mean home.

For now, though, I am unhomed,
hurtling homeless into heavens
I scarce believe in.
The engines shudder and roar.

Poet’s Notes:  Immigration is a recurring theme in my writing, poetry and fiction both. Stories of immigrants I've known, stories passed down of my grandparents and great-grandparents, resonate with me, and in this case I wondered about how those stories would compare to a future immigrant leaving (a scarred but still loved) earth, full of conflicting thoughts and emotions. Structurally, while I enjoy writing all kinds of poetry, including strict forms, this sort of free verse is what I most often use. Its rhythms and line breaks are largely intuitive in draft form and take their final shape through later, more deliberate tweaks and adjustments.

Editor’s Note:  As the son of an immigrant, this piece resonates with me as well.  I especially appreciate the way Mr. Ausema divides up his stanzas, beginning with leaving earth, then on to the spaceship, then anticipating the new planet, and then the final alliterative stanza that captures the emotions. The final line is simply breathtaking.  I picture the speaker shuddering outwardly and roaring inwardly in time with the rocket engines.  "The Immigrant Looks Back" first appeared in the November 2013 issue of Songs of Eretz Poetry E-zine.
Posted by Steven Wittenberg Gordon, MD at 7:26 PM