Poem of the Day: “Audition” by Guy Belleranti

Songs of Eretz Poetry Review is pleased to present “Audition” by Guy Belleranti.  Mr. Belleranti writes fiction, non-fiction, poetry, puzzles, and humor for adults and children. He’s been published in:  Woman’s World, Bards and Sages Quarterly, Liquid Imagination, Big Pulp, The Saturday Evening Post, Scifaikuest, Highlights for Children, Every Day Poets and many other places. Two of his flash mysteries were nominated for Derringer awards, and he has won cash awards in many writing contests. His website is www.guybelleranti.com/. 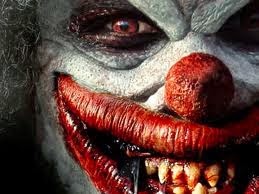 Looking for a job
in a haunted house
he put on his most ferocious face.
But people only laughed.

So he put on big shoes,
a round red nose
and a wild wig of ratty hair
and became a clown.

No one laughed then.

Poet’s Notes:  “Audition” came about when I was thinking about Halloween, haunted houses, and all the costumes that go with them. My thoughts continued on to one common year-round costumed performer, the clown. I thought of people’s different reactions to clowns. Some think they’re funny. Others, however, find them creepy and scary.

Editor’s Note:  The last line of this poem, deliberately set apart from the preceding four-line stanzas, slammed the horror right into my marrow.  I envisioned The Joker laughing maniacally or smiling seductively.  Brrrr!  “Audition” was first published in the anthology Anomalous Appetites in 2009 and reprinted in Songs of Eretz Poetry E-zine in February 2014.
Posted by Steven Wittenberg Gordon, MD at 5:30 PM