Poem of the Day: “Just Words” by Lauren McBride

Songs of Eretz Poetry Review is pleased to present “Just Words” by Lauren McBride.  Mrs. McBride finds inspiration in faith, nature, molecular biology (she is a former researcher), and membership in the Science Fiction Poetry Association (SFPA). She was nominated for a SFPA Dwarf Stars Award twice in 2014.  Her work has appeared in various speculative, nature, and children's publications including: Songs of Eretz Poetry E-zine, Dreams and Nightmares, Tales of the Talisman, and The Magazine of Speculative Poetry. She shares a love of laughter, science and the ocean with her husband and two children. 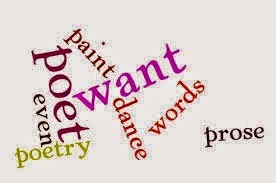 Who is essentially me -
my picture?
Or the pictures I paint
with my words?
Poems and prose -
lined up in rows.
Some are his story
some are hers -
all just words.

Is the eye the sole
window to the soul?
Or does writing
share more,
bare more,
lay naked the heart
by words penned?
Choose carefully:
may befriend
or offend.

We leave behind
our reflection
when we reflect
our thoughts
onto the page.
Height, weight, sex, age
matter not!
Ideas the truest measure -
words our gift,
our treasure.

Poet's Notes:  While a member of an online writing group, it occurred to me that we knew nothing about each other except for words on a page; and yet friendships formed, from words alone with no bias based on age, race, sex or social standing.  The image we present either face to face or in a picture is a choice, just like the thoughts we share. If limited to looks or ideas, which yields a truer sense of self? Pondering this question led to "Just Words."

Editor's Note:  I like the gentle rhymes and plays on words here--even the title has a double meaning ("just" as in "only" and "just" as in "righteous").  The theme, while hardly new, is still nicely stated and thought provoking.  "Just Words" first appeared in Word Slaw in March 2008 under the pen name, Elizabeth L. Collins, and was reprinted in Songs of Eretz Poetry E-zine in November 2014.
Posted by Steven Wittenberg Gordon, MD at 2:23 PM