Poem of the Day: “It just struck me” by Stephanie Campisi

Songs of Eretz Poetry Review is pleased to present “It just struck me” by Stephanie Campisi.  Ms. Campisi is an Australian poet and author whose work has been published in magazines and anthologies in many countries.  She indulges her sense of whimsy at poetdeploriate.tumblr.com and tweets at @readinasitting. 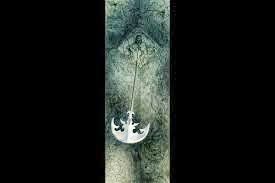 It just struck me
Stephanie Campisi

Poet’s Notes:  “It Just Struck Me” came to me late one night when the only sound in my apartment was that of the clock ticking. I was “struck” by what an uncomfortable sound it is, and also by its closeness to the beating of a human heart--a sound that similarly unnerves me in the way that it reminds us that we are merely machines of biology. I wanted to explore what it was about both of these sounds and experiences that bothered me, and this short poem is the result.

Editor’s Note:  The rhythm of the poem, with its two feet per line (excepting the last which is deliberately cut off) evokes the two beats of the ticking of a clock.  The ending is at once humorous and horrifying, as is the pun on the word “struck.”  I believe Edgar Allan Poe would approve.  “It Just Struck Me” first appeared on the poet’s TumblR account at poetdeploriate.tumblr.com and was reprinted in the May 2014 issue of Songs of Eretz Poetry E-zine.
Posted by Steven Wittenberg Gordon, MD at 8:26 PM