Poem of the Day: “Jefferson Turnip” by Ross Balcom

Songs of Eretz Poetry Review is pleased to present “Jefferson Turnip” by Ross Balcom.  Mr. Balcom is a counselor living in southern California. In addition to regular appearances in the Songs of Eretz venues, Mr. Balcom’s poems have appeared in Beyond Centauri, inkscrawl, Scifaikuest, Star*Line, Tigershark, and other publications. Currently, his favorite poets are John Ashbery, Lo Fu, and Michael McClure. In addition to poetry, his interests include parapsychology, hypnosis, and neuro-linguistic programming (NLP). 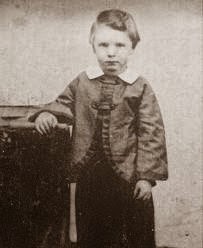 He appeared in the gloom
of the abandoned farmhouse.

Slender, sombre, pale,
a boy in his early teens,
semi-transparent, a ghost.

He spoke but once:
"My name is Jefferson Turnip,"
and then he vanished.

His disappearance
left a crushing weight
in the night-dark room.

I fell to my knees
and wept; long, long
and sorrowfully, I wept.

Boys are the heralds of life;
they should not die.

Had I the power, I would restore
dead boys to life, would grant them
an eternity of sunlit fields and playgrounds.

This boy, Jefferson Turnip,
a child of the soil, a rural splash
of wonder, his voice like a rainbow
arching over the fields, his laughter
bright with the promise of
still greater joy, this boy
whose home is the world,
the one true world, this boy
the world's salvation, a sun-bright
heart embracing all...

Alas, the ghost I saw
was only the flickering afterglow
of what once so brightly shone.

He honored me, a mere interloper,
with his presence, breaking and entering
my heart, rousing paternal waters.

And my tears profusely flowed.
Lord God, they flowed.

I see him dead,
laid in a box,
pale turnip
returned to the soil.
I pray eternal day
will follow
the loam's
dark night.

Bless you, Jefferson Turnip,
bless you forever.
You gifted me
with your presence,
you made yourself known.

Though but a ghost,
you have a face and a name,
and that face and that name
belong to a boy who,
long ago, was loved.

Poet’s Notes:  I had a dream in which I encountered a ghostly boy in an abandoned farmhouse. He said, "My name is Jefferson Turnip," and then he disappeared. I was inspired to write this poem.

Since writing the poem, Jefferson Turnip seems increasingly like a real person/presence to me. Maybe we are all "authored" into being. There is nothing mightier than the pen.

Editor’s Note:  I hear echoes of Whitman and Poe here, but this poem is still one hundred percent Balcom.  “Jefferson Turnip” first appeared (in poem form) in the May 2014 issue of Songs of Eretz Poetry E-zine.
Posted by Steven Wittenberg Gordon, MD at 2:13 PM