Poem of the Day: "Visions" by William E. Stafford, Poet of the Month

The Songs of Eretz Poem of the Day for July 14, 2014 is "Visions" by William E. Stafford, Poet of the Month.  Mr. Stafford's work has been reviewed previously here:  http://eretzsongs.blogspot.com/2014/04/poem-of-day-once-in-40s-by-william.html, where a brief biography and references may be found.  The text of "Visions" may be found here:  http://www.poetryfoundation.org/poem/172102.

"Visions" is a free verse poem arranged in five numbered stanzas of non-uniform length.  Each stanza describes a "vision," experience, or thought of the speaker, presumably the poet, that could serve as a stand-alone poem--there does not appear to be much that links one stanza directly to another. 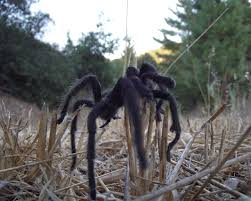 The first stanza recounts the unusual vision of a Mexican walking a pet tarantula in the same manner that one might walk a dog.  The speaker sees this as a divine message concerning the sanctity of all living things.

The second stanza is a commentary on the magical thinking that people engage in when gambling--more of a musing than a "vision."

The third stanza alludes to an incident when the speaker cut himself "to the bone."  This evoked visions in the speaker of whiteness--bone, snow, rocks on battlefields, grave markers, and roads.

The fourth stanza is a mini-elegy to someone named "Genevieve."  I particularly enjoyed the conceit of driving along a sunset ray--an interesting metaphor for death and memory.

The fifth stanza provides a conclusion of sorts.  Here, the speaker muses that some of his visions "combine" suddenly, and that he is perhaps better off for not following the trains of thought to which some of them might lead--he uses the metaphor of the sky looking at him as an example.
Posted by Steven Wittenberg Gordon, MD at 11:14 AM