Songs of Eretz Poetry Review is pleased to present "Mournful," a previously unpublished poem by Lauren McBride.  Mrs. McBride finds inspiration in faith, nature, molecular biology (she is a former researcher), and membership in the Science Fiction Poetry Association (SFPA).  Twice nominated for the 2014 SFPA Dwarf Stars Award, her work has appeared in various speculative, nature, and children's publications including: Songs of Eretz Poetry E-zine, Dreams and Nightmares, Tales of the Talisman, and The Magazine of Speculative Poetry.  She shares a love of laughter, science, and the ocean with her husband and two children. 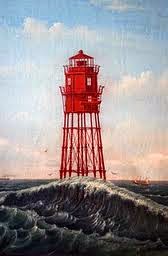 Mournful the howl of the wind
bringing clouds of darkest gray.

Mournful the cry of the keepers
feeling the lighthouse sway.

Mournful the rain, the lash of waves
washing the keepers away.

Mournful the wail of the widows
for loved ones drowned in the fray.

Poet's Notes:  Most of the poems I write are minimalist or free verse.  But I also love poetry where rhyme is integral to the writing, as traditional and children's poetry.  For weekly inspiration, I visit the blog of children's poet, Laura Purdie Salas, where poems of fifteen words or less and comments are posted on Thursdays around a picture prompt:  http://www.laurasalas.com/blog/.

"Mournful" is the result of an attempt to create a rhyme that invokes a mood, a sound, an ebb and flow of rhythm like waves upon a shore.  It was heavily influenced by stories I heard as a child about Minot's Light near Boston Harbor.

Editor's Note:  I love Mrs. McBride's use of anaphora here--driving like a rainstorm rather than tediously repetitive.  Her choice of the single rhyme supports the rhythm, and her use of consonance in the non-rhyming lines is particularly well-executed.  Her use of alliteration and consonance within lines evokes the sounds of the sea.

For another poem about Minot's Lighthouse and some interesting background and history, see:  http://eretzsongs.blogspot.com/2014/04/poem-of-day-minots-ledge-lighthouse-by.html.
Posted by Steven Wittenberg Gordon, MD at 8:19 PM